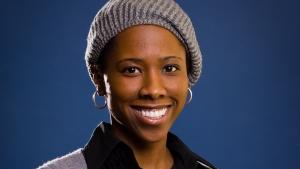 Kimberly Blackford was a student leader at the University of Louisville. She was president of her sorority, diversity chair for the Student Activities Board, and active in a variety of other organizations. But it took a long time for her to get involved in InterVarsity.

Her third year on campus she came to a turning point in her Christian life. “I was tired of living with guilt, one foot in the world and one foot in the church,” Kimberly said. “At a Wednesday night church service I decided to surrender my life fully to Jesus and live for him.”

A short time later she was invited to a Christian conference for Black students. “We all came back to campus [from the conference] eager to help other students find out about Jesus,” she said. “We set a goal of knocking on every dorm door on campus to share Jesus, and we did it.”

Tyren Edwards, InterVarsity’s campus staff member at the University of Louisville, joined the evangelism campaign and was paired with Kimberly. “I was looking for a mentor because I was really hungry for God,” Kimberly said. “I saw her as someone who could help me grow in my relationship with him.”

Tyren mentored Kimberly for a-year-and-a-half, and then invited Kimberly to go to InterVarsity’s regional Chapter Camp in Georgia, though Kimberly hadn’t been very involved in the InterVarsity chapter. And even though she hardly knew anyone, Kimberly went.

At Chapter Camp Kimberly became better acquainted with other InterVarsity students and staff members and went through small group leaders training. “It was a great experience,” she said.

The following semester, she led a small group Bible study on the Louisville campus. Tyren, who was leaving staff work to raise her family, invited Kimberly to take her place on InterVarsity staff at Louisville. Kimberly hesitated; she had been considering ministry at a church instead.

“Throughout that year the Lord worked in my heart to see more of a vision for campus, particularly working with Black students,” she recalled. “I realized that Black students were not going to cross cultures the way that I did to be a part of a predominantly White undergraduate group.”

As she talked with other InterVarsity staff, particularly Black Campus Ministries (BCM) staff, Kimberly realized that she wanted to be involved on the front lines of campus ministry, “dealing with people in their day-to-day stuff,” as she put it.

Today, after 14 years as an InterVarsity staff member, Kimberly is BCM coordinator for InterVarsity’s Southeast region. She helps plan an annual BCM regional conference called Remix, which drew about 175 students and staff this past February.

Kimberly is pleased about what’s happening in the Southeast region with Black Campus Ministries. Black student involvement has grown by 56 percent. At their region’s Chapter Camp this spring, for the first time, the majority of students were Black. “We haven’t heard of this happening at any InterVarsity Chapter Camp before,” she said.

“We praise God for what we are seeing,” Kimberly said. “BCM staff and White staff working with Black students are doing good, solid campus ministry with Black students.” Southeast Regional Director John Criswell agreed. “Though I can easily point to a team effort in this kind of result, it’s clearly a move of God as well,” he said. “We’re very eager to see where this will take us in the days ahead.”

The Remix conference, begun in 2011, has given InterVarsity a stronger presence with Black students. “They come to Remix and encounter the Lord, and as we talk about what it means to be both Black and Christian, they also find that InterVarsity is a ministry they can trust,” Kimberly said. At Remix, students build relationships with people on other campuses, and they hear from Black staff leaders that they need to keep investing in their spiritual growth. Those two incentives help bring them to Chapter Camp at the end of the year.

Campus ministries abound in the southeastern U.S., which is known as the Bible Belt. But relatively few campuses have ministries that are reaching students of color. For several years InterVarsity’s Southeast region Black staff have wanted to see Black students taking the lead in driving the mission on campus. “Seeing that happen is an answer to prayer,” Kimberly said.

She also believes it’s a result of deeply invested and gifted colleagues. “They know how to be relevant to Black students,” she said. “Black staff in the Southeast have worked hard to be creative and thoughtful in our outreach to Black students, and to speak to the culture. We have a burden to see black students follow Jesus with their whole lives and be leaders who shape what’s happening on campuses and in our communities.”

On some campuses in the Southeast, veteran White staff work with chapters made up of large numbers of Black students. “They’ve also done what it takes to build credibility with Black students,” Kimberly said. “They have good relationships with the students they work with. They also give space to let Black students take the lead with other Black students.”

As the cry “Black Lives Matter” ripples across the country, Kimberly believes the keys to successful  ministry to Black students include making Jesus relevant to the issues they face, and giving students safe places to ask questions and find community. She believes that even without events that bring to light social and systemic issues that still affect the Black community today, students want to hear about Jesus. “No matter what the climate is, there’s a need for the gospel. Students want to respond to the gospel, but it’s got to be relevant, in a way that they can hear it,” she said.

InterVarsity is committed to presenting the gospel in a manner that is relevant to students, so that they can hear it.