Both Feet in Faculty Ministry 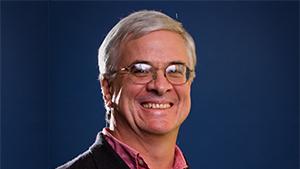 Deciding to join Graduate and Faculty Ministries (GFM) staff was not without its painful moments for Charles Barker. Specifically, it was the sunburn he endured from long hours of conversation on the dock at InterVarsity's Campus by the Sea during the West Coast Faculty Conference.

Charles had been invited to the conference by Lynn Gill, at that time the GFM Regional Director, when he had contacted her expressing an interest in faculty ministry.

During almost three decades on the pastoral staff at Pasadena Covenant Church, including 17 years as senior pastor, Charles was wary of getting caught up in the institutional life of the church. “I always felt like I was a pastor of a local church with one foot in the church and one foot in the local community,” he said. But after 27 years he prayed, “God, could I have both feet in the next season in my life in the secular world? Could I be a pastor to the non-Christian world with both feet?”

He wasn’t sure what that would look like. And when a friend suggested campus ministry with InterVarsity, he was dismissive. Working with undergrad college students seemed to him like a job for a younger person. But out of curiosity he went to InterVarsity’s website, and for some reason the initials GFM caught his eye.

And then he read the GFM ministry vision: “We are planting and building communities of deeply thoughtful, grace-filled graduate students and faculty to join together to bring Christ’s redeeming influence among the people, the ideas, and the structures of the university and professions.”

Charles thought, That’s exactly what vocational discipleship should be about. When he discovered all of the campuses in California without GFM ministry, he knew he had to respond. And that was how he ended up in long conversations with professors attending the 2009 West Coast Faculty Conference, sponsored by InterVarsity GFM.

One conversation represented the challenge of faculty ministry particularly well. The professor told him, “I experience a profound double loneliness. I am a leader in my church and I love my church, but none of the things that I spend 55-60 hours a week dealing with on campus are in conversation at my church.  Similarly, I have wonderful colleague friends on campus. But what informs my thinking about my research and my field—my Christian values, my Christian worldview—all of that feels like it’s off limits. And I really want to talk about that.”

Charles quickly realized he wanted to work in that academic environment, to help faculty members have the opportunity to connect their faith with their discipline and their campus. He wrote in his prayer journal, “This would be a privilege, a high and holy calling.”

The weekly faculty fellowship meetings typically draw 25-30 faculty and administrators from a group of about 75 and a total mailing list of about 200. “That’s remarkable growth in the last 10-12 years,” Charles said. “It’s been a time of God raising up and bringing to us wonderful, brilliant scholars who are Christians.”

Students are also being influenced. One Harvey Mudd College student shared her story at a faculty fellowship several years ago. She took Dave Vosburg’s organic chemistry class and appreciated his focus on green chemistry, addressing environmental challenges, and other aspects of his teaching. Curious about some of the things he said, she went online and found his blog, where he talked about how science and Christian faith are not at odds and how he holds the two together.

The student wanted to know more about Christianity and met with Dave during his office hours. For five or six weeks he answered her questions, and then connected her to an undergrad Bible study in her dorm. From there she joined the InterVarsity student chapter, where she met other Christian students, and was eventually baptized into the faith.

“I want to continue my education and return to campus,” she told the faculty gathering. “But I don’t want to be just a professor or researcher. I want to care holistically for people, as Dave does.”

Several years after he began working with Claremont faculty, Charles also began to plant a faculty chapter at California State University, Los Angeles. In addition he codirects InterVarsity's West Coast Faculty Conference, which is now held every summer on the campus of Westmont College.

In 2009, when Charles first visited the faculty conference, there were about 30 attendees. Now attendance runs around 165-170. About half are from schools with chapters of Christian faculty, and half from schools without.

“I think of this as an intensive experience of being a community of Christian scholars who are practicing vocational discipleship,” he said. “There’s a profound thing that we do in InterVarsity that requires that faculty leave behind functional dualism that says I have my family life, and my friendships, and my church volunteerism, and my spiritual growth, and that’s in this corner, and then I go to work and do my work there, and those two things never meet.”

In the academic world with both feet, Charles’s prayer is being answered as more and more faculty see their faith and academic worlds come together.