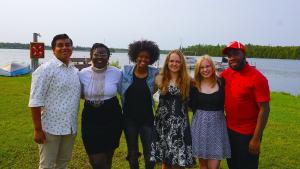 The students, staff, and volunteers traveling to InterVarsity’s Leadership Institute (IVLI) this summer all came with their own stories, struggles, and expectations. But most left feeling the same way: their time spent together was deeply powerful.

As the name implies, IVLI invites students to withdraw from day-to-day life for a month to focus on their walk with Christ and learn how to be more effective leaders. They also spent most of their time in community during rec time, meals, and Bible study. This helped them build a deeper level of trust with one another, which fostered a worship environment that “felt safe,” in the words of several participants.

As students began taking more risks in worship, they praised God through a variety of styles and languages, including Spanish, Farsi, Hmong, contemporary, and gospel. Those who came to IVLI feeling shy and timid found themselves praising God without reservation. And over the four weeks, participants were encouraged by the student worship leaders’ growth in their own expressions of worship.

“We can underestimate the importance of a disruptive discipleship experience,” Jon said, a campus minister who served IVLI’s last week as its third and final worship coordinator.

This unreserved worship and students’ displacement from everything they knew—school, church, home, friends, and family—led to greater openness and vulnerability. They were left with only each other and a space to be immersed in God’s presence.

One student worship leader, Grace, keenly felt the weight of making sure others were meeting Jesus during worship. As a result, she struggled to personally connect with him. But during a night of testimonies in the final week of IVLI, she shared this struggle. Grace’s confession and the other students’ responses allowed her to experience the transformation she’d been longing for all summer.

This newfound openness among students wasn’t limited just to worship. They supported each other during difficult moments of confession. They prayed for and encouraged one another. They rejoiced every time one of their fellow campers conquered a spiritual, physical, or emotional barrier.

Deciding to come to IVLI instead of doing a professional internship, Kelly, a junior at the University of Illinois at Urbana-Champaign, felt like she couldn’t let go of the mistakes she’d made as a small group leader this past year. But after talking to her family group leader, she found a way to break free of the lies that kept her feeling ashamed. “I realized the deep, unconditional, gracious love that God has for me as my Father, despite my mistakes,” she said.

Many students came to IVLI wanting to grow as leaders. During the week he was there, Jon saw them leave having realized that their leadership requires dependence on the Holy Spirit and trust in community “to share the burdens of life, the joys of life, the wins in ministry, and the failures in ministry.”

As students returned home and began planning for a new semester, they recognized that they’re not alone in their ministry. They have a newfound support system. And together they’re longing to share IVLI’s small glimpse of heaven with every corner of their campuses.