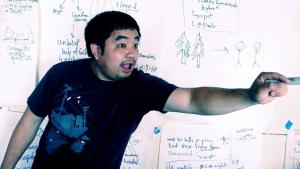 The InterVarsity Bible study that Daniel Lui attended as a freshman at the University of California San Diego (UCSD) became a life changing experience for him when his Bible study leader told him the object of the study was not perfect attendance. Instead, he suggested that Daniel skip the next meeting.

“He challenged me to hang out with my non-Christian friends,” Daniel said. The Bible study leader had noticed that Daniel was not spending much time with his suitemates in the dorm and suggested that getting to know them was the first step in introducing them to Jesus Christ. “That was really a defining moment for me in what it looks like to be a missional person.”

Daniel had grown up in the church and from an early age wanted to be a missionary. Suddenly, as a UCSD freshman, that vision for the future became flesh and blood reality. Instead of waiting to go to a faraway country, he discovered he could share his faith at any time, in any place.

Daniel is not sure that any of his suitemates ever responded to his invitations to follow Jesus after they became friends. But as he began to allow God’s mission to shape his life and his contacts, it did have an impact on others. Later, when he was working in a school cafeteria, he saw his boss come to faith.

After graduation he applied to become an InterVarsity staff worker at UCSD but was asked to consider MiraCosta College instead. Even though friends who he had asked to pray for his placement told him MiraCosta was the right choice for him, he was conflicted. When Daniel arrived at InterVarsity’s Orientation of New Staff, the day after graduation, he felt like the reluctant prophet Jonah.

One of the ONS leaders sensed his reticence and asked to pray with him. As they prayed, the leader mentioned a vision of a cactus, with thorns exploding into flowers. Daniel was amazed—the vision matched a vivid dream he had had two months earlier.

Now, seven years after his calling was confirmed, Daniel is grateful to have been placed on the community college campus. “We’ve seen God do a lot of really good work in a setting where we traditionally don’t expect InterVarsity chapters to thrive,” he said. “I look back now, and I don’t know if I could be anywhere else but the community college. I love it so much. God has grown my heart for 2-year campuses.”

Each week there are five different Bible studies led by MiraCosta students, in the cafeteria or outside in the fresh air. Daniel has worked with the Bible study leaders to help them more sharply focus the studies and also include time for building relationships. “We try to create a highly invitational culture,” he said.

As many as 75 students have been involved with InterVarsity at MiraCosta, although they’re never all together at the same time. On Wednesday evenings a couple dozen of them pile into cars and attend the weekly Large Group meeting at nearby California State University San Marcos. Some of them may eventually end up working for a 4-year degree at San Marcos and will already be connected to the San Marcos chapter.

Daniel finds it ironic that 2-year campuses are called community colleges, because it’s so hard to build community in the midst of commuting students, many of whom are so busy they don’t spend any more time on campus than they have to. “One of the challenges is to give people a reason to stay, and a sense of calling, to realize that maybe God called them to community college for a reason and for a mission,” he said.

InterVarsity is the largest student organization at MiraCosta. Daniel believes InterVarsity’s presence not only renews the campus but also renews the community in which the campus is embedded. “We’re doing things the university cannot do and is not equipped to do,” he said. “We’re not just giving them education, we’re empowering students with the spiritual authority to get over the things that they’re stuck in. Just because they’re attending a community college, that doesn’t disqualify them from being great leaders in their families and in their future workplaces.”

As an InterVarsity Campus Staff Member working at a 2-year community college, Daniel has learned that no ground is too hard for God to produce fruit. He hopes to see campus ministry on more 2-year campuses. “We have to stop looking at our fields as difficult places and start seeing them as places where God can get really creative, do unique things, and bring fruit where we don’t expect it,” he said.

Students are coming to faith MiraCosta through InterVarsity, and Daniel believes this is just the beginning of what God wants to do on campus.