A Call for Prayer for St. Louis Churches 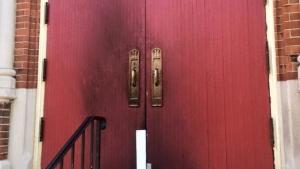 We’re grieved that as of today seven churches, most of which serve predominantly Black communities in the St. Louis area, have been intentionally set on fire since October 8th.InterVarsity has a significant presence in St. Louis, including our campus ministries, Urban Program, and the upcoming Urbana 15 Student Missions Conference this December. Though we do not know why these fires have been set, we pray for and stand with the Black community there as they experience fear, stress and uncertainty.

Michelle Higgins, a church leader from South City Church in Saint Louis who will speak at Urbana 15, noted today that whoever is doing this is having a grave impact on the community.“These are churches that are ministering in needy areas. North St. Louis is largely African American. Most Black churches will have a meal together each week, and many people who can’t afford to eat well regularly will get their one good meal at church.

Higgins called the Christian community to unite around these attacks. "This is a call for St. Louis churches to view one another as One Church, and not multiple churches. This is our opportunity to break down the barriers.”

As 16,000 people prepare to go to InterVarsity’s Urbana 15 in St. Louis, would you join us in praying for the churches and people of St. Louis?  “We recognize that intercession and engaging the pain in the communities closest to us is an integral part of global missions,” said Urbana Director Tom Lin, InterVarsity’s Vice President and Director of Missions. “InterVarsity stands with St. Louis for the good of the world.”

InterVarsity is contributing to the fund to install security systems and conduct repairs at the seven churches targeted in these attacks.

UPDATE: The St. Louis Post-Dispatch reports an arrest has been made in the case.