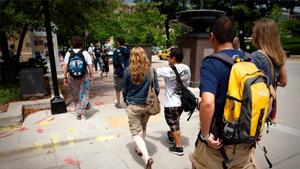 (Madison, WI) -- The U.S. Commission on Civil Rights has announced a briefing focused on the intersection of non-discrimination policies with civil liberties principles. InterVarsity staff and students have been invited to submit statements on incidents where universities have attempted to restrict the religious liberties of student groups in the name of non-discrimination.

It began for InterVarsity more than ten years ago when campuses such as Harvard and Rutgers attempted to limit our ministry on campus because InterVarsity requires student leaders to affirm InterVarsity’s doctrinal statement. Since the 2010 U.S. Supreme Court decision in the case of CLS v. Martinez, even more campuses have pressed InterVarsity and other campus ministries on the use of religious criteria to select student leaders.

In most cases—at Harvard and Rutgers, and more recently at schools such as Ohio State, Michigan, Minnesota, Maryland, and Tufts—universities have amended their non-discrimination policies to permit religious student groups to use religious criteria in leadership selection. InterVarsity has always affirmed the applicability of nondiscrimination policies to group membership.

These schools recognize that religious organizations should not be forced into a position which would threaten their religious vitality. At Ohio State University the student organization registration guidelines now state: “A student organization formed to foster or affirm the sincerely held religious beliefs of its members may adopt eligibility criteria for its Student Officers that are consistent with those beliefs.”

Last year 14 religious organizations at Vanderbilt University, including several InterVarsity chapters, were prohibited from becoming registered student organizations because they follow the guidelines of their faith in choosing leaders. As a result, those organizations, which represent over 10 percent of the students on campus, may not partner with registered student groups for the purposes of community service, worship, or learning. They also have limited access to Vanderbilt campus facilities for their meetings, and they enjoy none of the privileges extended to all other student organizations.

Last week, the Board of Trustees of Rollins College in Winter Park, FL, rejected a request by the school’s InterVarsity chapter to be allowed to require its leaders to be followers of the Christian faith. In a February 22nd statement the Board said, “The principles of the nondiscrimination policy, which are at the heart of the educational process, are inconsistent with allowing exceptions for student organizations; such exceptions would be inconsistent with the processes of learning and growth that the College seeks to foster.” For the Rollins Board, non-discrimination principles permit the college to limit authentic religious expression on campus and to discriminate against religious groups.

We are hopeful that this investigation by the Civil Rights Commission will result in more colleges and universities being willing to resolve perceived conflicts between non-discrimination policies and our country’s strong heritage of religious freedom. We welcome the opportunity to participate in their deliberative process.

We have a section of background information on this topic on our website called Campus Access Concerns.

We also have a follow-up report on what happened at the Civil Rights Commission briefing.