Campus Ministry on the Big Island 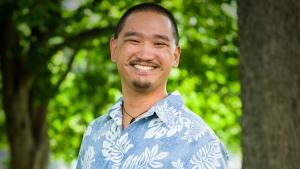 Brennan Takayama faced a difficult decision. After graduation from Stanford University, he had returned to his home in Hawaiʻi to research native Hawaiian education issues while also volunteering with InterVarsity on the campus of the University of Hawaiʻi at Mānoa.  Two years later he was invited to join InterVarsity full-time. It was a life-changing opportunity.

He spent an afternoon praying about it. Following his father’s advice, he asked God to show him what he saw him doing. He felt Jesus asking him, “What are the deepest desires of your heart?”

Thinking about all of the time he had invested in learning about adolescent development and education, he knew his answer:  to see the transformation of Hawaiʻi and the empowerment of young people.

He then sensed Jesus asking him, “How do you see that happening?” And Brennan responded, “Only through you, Jesus, only through you.” Suddenly he saw clearly how he should proceed.

“Something in that interaction with Jesus captured my heart,” Brennan said. “I saw that InterVarsity was a space where I could actively pursue those passions.”

So Brennan became a full-time Campus Staff Member in 2009. In 2011 he began new chapters at the University of Hawaiʻi at Hilo and then Hawaiʻi Community College. The two campuses are located just a couple blocks apart, right next to the high school that Brennan attended over a decade ago.

Brennan’s vision for Hawaiʻi is quite similar to InterVarsity’s Vision Statement: to see students and faculty transformed, campuses renewed, and world changers developed. But planting a new chapter can be a difficult job, especially on an island where there are no other InterVarsity staff members. Brennan said that having confidence in himself and in who God made him to be, as well as abiding in God’s love have been key to the success of his ministry.

Because he is ministering on one of the most ethnically diverse campuses in the country, the training in multiethnicity that he has received through InterVarsity has also been key. As a student Brennan was at first confused about InterVarsity’s focus on faith and culture. And when, at the end of his freshman year, he and some InterVarsity friends decided to move into Casa Zapata (a Chicano/Latino-themed dorm) in order to reach out to neighboring freshman dorms, he was not so sure it was a good idea. Brennan was not familiar with Latino culture.

But during his junior and senior years he ended up co-leading a Bible study in Casa Zapata and was warmly welcomed into the community. “The challenges that I faced and the blessings that I received totally transformed the way I see myself in my own ethnic identity, as well as how I reach out to pursue God’s mission,” he said.

In the midst of ministry to other students of Japanese and Chinese heritage, like himself, as well as Samoan, Micronesian, and Filipino students, Brennan is also focused on reaching the native Hawaiian community.

Each summer, InterVarsity invites students to Hoʻolohe pono, a two-week immersion into Hawaiian culture. Hoʻolohe pono means “to listen carefully, well, and rightly.” Brennan observed, “The model of listening, learning, and serving before speaking can be applied to a ton of learning communities. It’s a great training experience for reaching out cross-culturally.”

Aspects of InterVarsity culture translate well to Hawaiian culture. Small groups are called “ʻohana groups,” which means “family groups.” The weekly large group meeting familiar to many chapters is done a little differently in Hawaiʻi. Called Kanikapila, it is more like an occasional worship jamfest with student testimonies. In both ʻohana groups and Kanikapila, students are being challenged to follow Christ, and they are responding.

As the chapter grows, and as students grow in their faith, Brennan’s vision of seeing Hawaiʻi transformed and young people empowered is becoming a reality.