A Campus Ministry Response to Ferguson 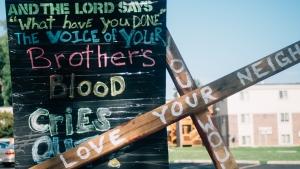 The issues in Ferguson, Missouri, resonate with many students on college campuses across the country: racial tensions, discrimination, abuse of power, and historical patterns of oppression. And these same issues affect many across the country. So as the grand jury looking into the Michael Brown shooting prepared to announce its findings, InterVarsity staff and students sought a response that constructively connected with our biblical concerns for ethnic reconciliation and justice.

For InterVarsity’s campus ministry, as well as for the Ferguson area institutions, this is a significant moment. “The events in Ferguson, and the broader social discourse, serve as a test for our core value of ethnic reconciliation and justice,” said Paula Fuller, InterVarsity’s Vice President and Director of Multiethnic Ministries. “As a ministry committed to establishing and advancing witnessing communities on our university and college campuses that are growing in love for people of every ethnicity and culture, how we attend to the events unfolding in the public square will either lend credence to our commitment or cause our words to have a hollow ring.”

InterVarsity staff have assembled a package of resources designed to help college students engage with their campus communities in a proactive manner, with approaches that range from a prayer gathering on campus, to a student survey, to an artistic display that probes the issue of police brutality. Some InterVarsity staff are working closely with church and community leaders in Ferguson as agents of reconciliation and advocating more broadly for awareness and understanding.

InterVarsity alumni are also active in planning constructive response to the events in Ferguson. Several serve on the Ferguson Commission, appointed by Missouri Governor Jay Nixon to study the issues underlying the Ferguson incidents and issue recommendations. Members of the Commission include T.R. Carr, Professor of Public Administration at Southern Illinois University at Edwardsville and former mayor of Hazelwood MO. He is an InterVarsity alumnus and longtime InterVarsity volunteer. Also on the Commission, Brittney Packnett, Executive Director of Teach For America and alumna of InterVarsity's Harambee Christian Ministries chapter at Washington University.

We lament the death of Michael Brown, and the wasted lives of all who suffer under racist structures that sap their potential. We confess that we have not worked hard enough to change those institutions which perpetuate some of the sins that began centuries ago in the days of legalized slavery. We are called to work to reform unjust systems and pursue racial reconciliation.