Campus Ministry Through a Different Lens 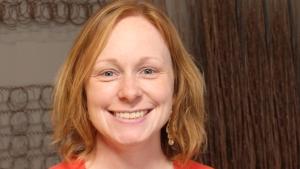 More and more community college students are experiencing new life through InterVarsity campus ministry. And InterVarsity staff member Christy Gates suggests that if more of her colleagues tithed their time for outreach on a nearby community college campus, it would revitalize their ministry. “Everybody needs something to keep their innovation sharp,” she said. “Those four hours would give staff the opportunity to think differently and see what they’re doing at a residential school through a different lens.”

The perception of ministry on community college campuses is that it’s more challenging than on a residential college campus. “It’s not hard; it’s just different,” Christy said. With the right strategy and good coaching, ministry can be fruitful.

“Even spending one afternoon a week at a community college, you can meet people; you can see something happen,” she said. “There are so many people who are ready to come to faith but no one is going to their schools to invite them.”

Community college students often have jobs -- sometimes full-time jobs -- and family responsibilities. They don’t hang around campus after class because their schedules are busy. Yet they have the same spiritual hunger and the same desire to find meaning and purpose in life that students on residential campuses have.

Christy’s skills in commuter campus ministry were honed during two years as a volunteer and seven years of full-time ministry at Purdue University—Calumet and other nearby commuter campuses in the south suburbs of Chicago. Then a year-and-a-half ago she married Marvin, a Coast Guard helicopter pilot, and moved halfway across the country to San Diego.

Moving from the Midwest to Southern California, even to do the same kind of work, is more than just an internal transfer.

“I knew that learning the culture of a new region would be a challenge,” Christy said. Friends on staff coached her to help prepare her for the changes. Eighteen months later she’s still adjusting and impatient with the adjustment process, but resigned to the reality that transitioning to a new region involves a continual commitment to learning and growing.

Now as an Associate Area Director she works with a team of staff at San Diego State University and nine surrounding campuses. One of her main goals is to help her team better reach students at the community college campuses. “Seeing staff and students get excited about what God is doing on community college campuses—those are the moments when I feel like this is worth it.”

One of the things she appreciates most about San Diego is the strong tradition of evangelism and prayer that’s been developed. San Diego evangelism is widely known across InterVarsity, and Christy learned about it long before she knew she would be moving to San Diego. “The way I’ve grown the most though is by the culture of prayer here,” she said.

Christy stumbled across InterVarsity midway through her sophomore year at Marquette University in Milwaukee. “I was hanging out with friends, trying to get good grades, but struggling with what my real purpose in college was,” she said. She joined a Bible study and made some new friends, and then was invited to Cedar Campus for Chapter Focus Week at the end of the school year.

“I remember encountering God’s love in a way that affected me as a whole person, not just intellectually,” she recalled. “I recommitted my life to Jesus and also solidified my involvement with InterVarsity.”

Over the next four years, as an undergrad and then a grad student, Christy became one of the leaders in the Marquette InterVarsity chapter. “It was a great time of growth,” she said. “I was all-in with InterVarsity.” That included attending Urbana 2000 and getting involved with the Chicago Urban Program (CUP). She returned to Cedar Campus several times and experienced God’s love in a variety of ways, expressed through the students and staff she worked with, and the various tracks at the events held there.

Over a period of time she challenged God with various questions about full-time staff work, and God answered each question she had. Still she resisted. “I was concerned that I would ruin God’s will for my life if I didn't clearly hear God telling me to do it,” she said. Finally a radio sermon helped her realize that she could join staff if that was what she really wanted. And then when she was offered a promotion at work, she knew that what she really wanted was to work with students full-time through InterVarsity.

Now, as a transplanted Midwesterner in Southern California, Christy still works directly with students at San Diego State, Grossmont College, and Mesa College. Through all of the changes of the last two years she feels like she’s learned a lot more about campus ministry and discovered many of her blind spots. She recommends that more staff take advantage of peer visits and opportunities to gain new perspectives into campus ministry from visiting other regions.

Because of her husband’s job, she knows she will be moving again in another year-and-a-half. Wherever they move, Christy hopes to be able to continue working with students. After all of her struggles about career direction, she knows that there’s nothing she wants more than to see God at work through students and faculty on campus.