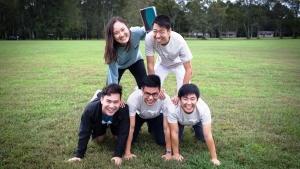 Seven years have passed since InterVarsity chapters were among almost a dozen campus ministries that were derecognized by Vanderbilt University. Students who are graduating this spring have no memory of what it was like before derecognition, and yet InterVarsity staff at Vanderbilt report their work continues with both challenges and successes.

When InterVarsity chapters are derecognized—kicked off campus is another way of describing it—the chapters don’t disappear. Chapter leaders adjust to operating without the official stamp of approval and the benefits that official recognition provides, and stay the course with Bible studies, prayer meetings, and evangelistic outreaches.

Derecognition has most typically affected InterVarsity when colleges and universities institute nondiscrimination policies mandating that membership, or more specifically leadership, in recognized student organizations must be open to all students regardless of religious belief. InterVarsity welcomes all students into chapter activities but believes leadership should be reserved for students with demonstrated leadership qualities, including adherence to traditional Christian doctrines and standards of morality.

“God is still at work, even if the situation is not ideal,” said Rachel Harmon, an InterVarsity Campus Staff Minister with Greek students at Vanderbilt, and a recently launched Black Campus Ministries chapter. Colin Fagan, who works with graduate students, agreed. “The many frustrations with regard to the policy change I would say are minor grievances,” he noted. “It’s nothing that would be a significant hindrance to our ability to do ministry.”

One of the main reasons that campus ministry continues at Vanderbilt—despite the derecognitions—is that the Office of Religious Life kept the door open to all groups without regard to status. “We told the Christian derecognized groups, ‘We’re here to help you. We’re sympathetic and we want you to succeed,’” said Mark Forrester, who directed the office as chaplain for six years, and served as the Methodist chaplain for 18 years before that. He left his job at Vanderbilt late in 2018.

Mark said that the office realized that a fair assessment of most of the derecognized groups showed that they had been good citizens on campus; they had not violated past policy. “We didn’t want them to go away,” he said. “They were still serving the significant need of a wide range of students.”

The derecognition was difficult, but Mark maintains that religious life on campus is vibrant. “There is a significant presence of religious devotion, including Christian, Jewish, Muslim, and otherwise,” he said. He supports Vanderbilt’s nondiscrimination policy, which was behind the derecognition, but doesn’t like the way it was implemented. He said his office was not consulted on the policy change; it looked to him like the university administration viewed religious life as more of a liability than a gift to be cultivated.

Kristen Wilkinson, who works with the Asian American Christian Fellowship (AACF), InterVarsity’s largest chapter at Vanderbilt, says students who are now far removed from the original derecognition decision are sometimes confused over the current situation, particularly when the rules change, such as room reservation requirements sometimes do. The AACF chapter hosts small group Bible studies and has a regular large group meeting.

“I see the campus status affecting them in more subtle ways,” Kristen said. Their unrecognized status “feels like confirmation of a common issue of Asian American voices being stifled and their needs not being taken seriously.”

Rachel came to Vanderbilt four years ago with the goal of planting a chapter for Greek students. Fifty percent of Vanderbilt undergrads are involved with a fraternity or a sorority. However, as some of the Black students she was working with discovered the broad scope of InterVarsity’s campus ministry, they told her, “We love being Greek, but the huge need at Vanderbilt right now is something reaching Black students.”

So after a semester of Bible studies and other preparatory steps, a launch night for a Collegiate Black Christian (CBC) chapter was held on campus last spring. The room filled up and then there was a line out the door. The chapter got off to a strong start.

The CBC chapter continues to grow, without official recognition. Specifically, that means they are allowed to reserve rooms and meet on campus. However they have to wait until all of the recognized student groups have made their room reservations and then pick from what’s left. They cannot use Vanderbilt’s name in the name of their chapter. They cannot participate in student organization fairs or apply for funding. And they cannot co-sponsor an event with a recognized student organization.

So, for example, when Veritas Forum, an organization that sponsors campus dialogues exploring truth and other philosophical issues, brings an event to Vanderbilt, all of the cooperative support from InterVarsity chapters is unrecognized. Only officially recognized campus groups are listed in the program.

“We have to be careful how we market that,” Colin said about InterVarsity’s involvement. “Some of the boundaries are clear, others are not so clear. Navigating the grey space can sometimes be tricky.”

InterVarsity’s grad chapter at Vanderbilt is currently in a rebuilding stage and Colin said it would have been helpful to have access to a student organization fair. Rich Zeigler, another InterVarsity Campus Staff Minister who works with international students agreed. “The main thing that has changed is our ability to go to the Religious Life Fair and meet students who may be looking for a Christian group on campus,” he said.

Colin said InterVarsity staff have countered that situation by partnering more robustly with local church communities. Students inviting other students to get involved, either personally or through social media, has also been effective. And grad students appreciate the opportunity to meet off campus, since they spend so much time on campus. “When it comes to an opportunity to do something off campus, they’re like, ‘Yes, please, let’s be away from here for some period of time for our own sanity,’” Colin said.

Brian Pugh, another InterVarsity Campus Staff Minister who works with medical school students, also meets more frequently off-campus than on-campus with his students. “The only annoying thing about the policy is the advertising prohibition,” he said. But once he has student email addresses, it’s easy to stay in contact.

All in all, InterVarsity has seven chapters which continue to meet at Vanderbilt, including a faculty chapter. Don Paul Gross, a Regional Director for InterVarsity’s Graduate and Faculty Ministries, who lives in Nashville, said, “God is not limited, and we see him continue to work at Vanderbilt.”