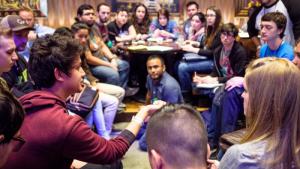 This regulation arose because public colleges sometimes discriminated against Muslim, Jewish, Christian, Buddhist, Sikh and other religious clubs based on their religious expectations for their leaders. For example, in 2018, the University of Iowa derecognized multiple religious groups, including Muslim, Sikh, Christian, Jewish, and Hindu student groups because their faith traditions require that religious observances be led by people from their faith.

Student groups with official university recognition enjoy access to campus meeting space and to a variety of channels of communication with other students. Religious organizations from diverse faith traditions agree they want to maintain their right to choose leaders who practice their religious mission and tenets.

“This regulation was unfortunately necessary because some universities would give official recognition only to certain faith-based groups, while rejecting others,” said Greg Jao, Director of External Relations for InterVarsity Christian Fellowship/USA. “What made the student groups who were denied recognition different? They expected their student leaders to agree with their religious beliefs. The recognized groups did not. Universities should welcome all religious groups equally, in order to encourage tolerance, pluralism and religious diversity.”

“This new regulation is an important policy for Muslim student organizations because it allows them to select their own leaders and define their own mission by their faith's principles,” said Ismail Royer, Director of the Islam and Religious Freedom Action Team for the Religious Freedom Institute. “This right should be reserved for all student religious organizations, and not usurped by university officials based on their own shifting, unpredictable standards.”

“Jewish groups operate widely on campuses across the country and contribute positively to Jewish students’ university experience, creating a home environment that is familiar and supportive to them,” observed Rabbi Abba Cohen, Agudath Israel of America’s Vice President for Government Affairs.  “Religious groups should be encouraged on campus. It simply defies logic, and undermines their very effectiveness, when religious groups are forced to forfeit leadership policies that better insure adherence to their religious mission, beliefs and practices.”

“Faith traditions uniquely support and sustain students of color on campus,” said Jimmy McGee, President of the Impact Movement, a Christian campus ministry focused on Black students. “Our beliefs are not interchangeable or negotiable. Universities that want to support students of color need to support their religious traditions.”