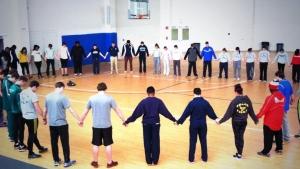 The beginning of this year’s indoor track season brought an expansive opportunity for ministry to Mickey Miela, a Campus Staff Member of the new Athletes InterVarsity ministry. Working part-time as an assistant track coach at Assumption College in Worcester, Massachusetts, Mickey was able to make contact with athletes at over a dozen other schools, all attending a non-conference track meet at the Reggie Lewis Center in Boston.

Mickey and a Christian athlete he knew from Bridgewater State University visited all of the teams that had arrived for the meet and invited members to a 10:00am prayer meeting before the competition started. He didn’t know how many would come but he was astounded by the result. “Fifty athletes showed up,” he said. “I thought it might be a small circle, it ended up as a large circle.” (Mickey tells more of the story on the Athletes InterVarsity website.)

Mickey has made contact with athletes in almost every sport at Assumption, but he’s already thinking beyond the campus. He’s excited by the opportunities presented through his participation in the track program. “It’s the only sport where 15 or more schools can be represented at one meet,” he said. “You have the opportunity to open a lot of doors all at once. You can cast your net wide.”

Mickey attended Stonehill College, another school in the same conference as Assumption, and was a member of the track and football teams. Traveling to New England from his home in southern California, he experienced the isolation common among athletes far from home, and many times stuck on campus when the rest of their fellow students are on vacation. Shared experiences are a bond that helps energize much of his ministry today.

“Athletes appreciate support tremendously,” he said. “Just sitting in the stands can go farther than actually having a conversation with an athlete. They see that you are the real deal by just coming and supporting them.”

Athletes’ schedules are ruled by practice and performance times and are often out of synch with other students. That means finding time to meet with the athletes on their own schedules, often late at night.

There’s Got to Be More to Life

God spoke to Mickey Miela in high school as he sat in his car in the high school parking lot. With parking at a premium, he got to school early, and as he waited for classes to start he read Rick Warren’s best selling book, The Purpose Driven Life.

Mickey drove by Rick Warren’s church every day on his way to school, but he picked up the book because of some personal disappointments. He had broken up with his girlfriend and his performance on the football team had fallen far short of his expectations. “There’s got to be more to life than this,” he had thought.

“I’d read a chapter a day before school, and pretty much thought about it all day,” he said. “At the end of the book, I realized I didn’t know a lot about Jesus, but I knew I wanted to give my whole life to Him.” He began to pursue Jesus with the same discipline he had developed through athletics.

Becoming a Leader on Campus

When Mickey arrived at Stonehill he was pleased that his football coach invited him to attend church, but it was different than what he was used to. In California he worshipped with about 18,000 other people on a Sunday morning. In Massachusetts the church had about 75 attendees, including children. But the smaller congregation cared for him in a way that he had not experienced before. “I started to see what the church body was all about,” he said.

Mickey ran the 400 meter dash and 400 meter hurdles in track, and played safety on the football team. He was also leading Bible studies with both teams. After his first two years he decided to drop track and concentrate on football, and he was pleased to see another player pick up leadership of the track team Bible study. “The two sports were taking up all of my time and my energy and God was getting the leftovers,” he said. “I wanted to be able to invest more into what God was doing on campus.”

At about the same time, Athletes InterVarsity ministry was starting to blossom and Mickey connected with Maghan Perez, the ministry director. She became a mentor and encouraged him to consider joining InterVarsity staff. When he attended InterVarsity’s Urbana Student Missions Conference in December 2012, during his senior year, the decision was weighing on his mind.

Mickey had the opportunity to give his testimony to other student athletes at Urbana and was surprised at the response. “Students kept coming up to me asking me questions and telling me how my experience encouraged them to start something on their teams,” he said. “I started to get a glimpse into what being on staff was all about. I got a taste of it.”

Back home in California after Urbana and before the resumption of classes, Mickey decided to join InterVarsity staff. It was not only the experience he had had at Urbana that motivated him, but also the possibility of eventually bringing Athletes InterVarsity, now centered in the Northeastern U.S., to Southern California that helped him resolve his uncertainty. “I know the terrain,” he said. “I feel like that could be why God has brought me on staff.”

For many years InterVarsity was mistaken for a sports ministry. Now that Athletes InterVarsity has begun, it’s one of the most explosive growth areas of our expanding ministry. Mickey is excited about the wide open opportunities. “God has tilled the soil, and I think we’re on the verge of harvesting everything,” he said.