The Challenge and the Opportunity 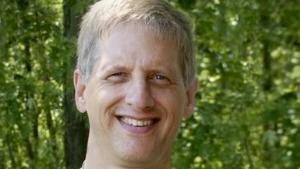 For the first time ever, more than one million college students from abroad are studying on U.S. campuses. The Institute of International Education’s Open Doors 2016 Report says the international students come from 219 countries in all, but most are from China and India.

International students have been part of Marc’s work on campus from the beginning, although not always his main focus. He started an international student outreach as part of his first InterVarsity assignment at Kent State University 29 years ago. Over the years he’s observed the proportion of undergraduates to graduate students gradually increasing in the international student ranks, and has seen steady growth in numbers as globalization continues to open the door to more and more students from other countries.

Marc first connected with InterVarsity before he became a student at Ohio State University (OSU). As a fairly new believer, he benefited from a weeklong retreat at InterVarsity’s Cedar Campus the week before classes started. “My entire vocational life and values, the shape of who I am, was profoundly impacted that week by InterVarsity,” he recalled. “I remember realizing that Christianity was not something I was adding to my life; it was going to be my life.”

The following week when he arrived on the OSU campus as a freshman he immediately connected with the InterVarsity chapter and then held several leadership positions as a student, serving as chapter president his senior year. Following graduation, he worked as a chemical engineer for a consulting firm for eight years, but then returned to campus to join InterVarsity’s ministry. He has been with InterVarsity ever since, serving most recently as Ohio division director, before becoming ISM director two years ago.

Hospitality has always been a high value in international student ministry; to help newcomers adapt to an often strange culture and offer a friendly person to talk with. Marc encourages those who have never befriended an international student to seek out opportunities. “The gospel is intrinsically cross-cultural,” he said. “Reaching across cultures seems to be close to the heart of God.”

And while hospitality is a good starting place for anyone, especially during the holiday season, he encourages Christians to avoid being pushy about their faith while at the same time not avoiding talking about it when the right opportunity comes. “[International students] come from different perspectives but there is a lot of curiosity about Jesus,” he said.

One of the most unique aspects of ministry to international students on many campuses is the unusually high level of cooperation among staff working for different organizations. “It’s one of the most pleasant discoveries I made since becoming director,” Marc said. “The degree of partnership in international student ministry exceeds significantly the partnership I experienced when I was a division director, working with American students.”

Other ISM tools that are being developed include resources to help internationals in student leadership development and resources to help students grow in their faith following their return to their home country. One of the most challenging ISM issues is the large attrition rate among students who begin following Christ in the U.S. A group of eight international student leaders is currently involved in a project designed to reveal more of the dynamics of returning students. They are receiving extra training in discipleship practices and cross-cultural leadership skills.

InterVarsity has one further important ISM resource: a partner movement—affiliates of the International Fellowship of Evangelical Students—in 168 countries. Marc is working on building relationships with IFES, including developing an exchange program with the German movement. He’s looking forward to learning how international student ministry is done in other countries.

“We have a unique opportunity in history to influence the world through international students,” Marc said. “I don’t know how long this window will be open. The best and the brightest are coming to the U.S. above any other country. We cannot be indifferent to this opportunity.”