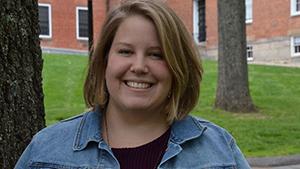 Elizabeth Booher was near the beginning of her 2011 semester abroad at the University of Canterbury in New Zealand, sitting in the first class of the day, when the building started shaking. The university was heavily damaged by the earthquake that struck and ended up being shut down for the semester. Amidst the destruction and casualties in the city, Elizabeth wasn’t sure what to do.

Officials from Smith College, her school back in Massachusetts, called every day, wanting to know if she was returning to the U.S. She decided she was not. A transfer was negotiated to the University of Otago in Dunedin.

Not long after arriving at Otago Elizabeth stumbled across two women having a Bible study in the student center and found out they were part of a campus Christian fellowship, like InterVarsity, affiliated with the International Fellowship of Evangelical Students (IFES). As she got involved in the chapter, the inductive Bible studies felt very similar to what she was used to in her InterVarsity chapter back at Smith.

While at Otago, Elizabeth had an honest and deep conversation with a former Campus Staff Minister and confronted the uncertainties and worry she was feeling about an invitation to join InterVarsity staff after graduation. While she had “majored in InterVarsity” and been very active in the Smith Christian Fellowship (SCF), she was doubtful about her capacity for ministry. But the conversation was very clarifying and when she got back to Smith to begin her senior year, she was ready to start the application process for coming on staff with InterVarsity.

Also at Otago, Elizabeth deepened her appreciation of Christians from other cultures.

“I don’t think I realized how mono-cultural my life was—even though I had friends from so many different ethnic backgrounds and countries as a student at Smith—until I engaged in my faith with students from other cultural experiences,” she said. “It helped humble me and encourage me. It's hard to describe how encouraged I was, especially by my friends from Malaysia and the faith they had. I realized we were really missing those students in our fellowship back home.”

She began her senior year at Smith with a plan to start a Bible study for international students. “At every New Student Outreach event that fall I met at least one international student who was not a Christian who had been wanting to study Scripture,” she said. A local family who lived near campus opened up their home for the Bible study and each week students from a half dozen different countries participated.

Elizabeth is now in her sixth year on staff with InterVarsity.  She was a full-time staff minister at Smith for three years but has been part-time there the last two years, as she also became the Area Director for the Five College and Greater Springfield areas of western Massachusetts, now known as the Pioneer Valley Team.

SCF is among the growing number of chapters that no longer have a large group meeting during the week. “It’s clear that at Smith the model of ministry that is working best is small intimate communities with people you already have trust with,” she said. Focusing on small group Bible studies has been a key component of SCF’s growth. But the proximity of vibrant ministry on other nearby campuses has also been key.

The student leaders from Smith and from the chapters at other consortium schools that Elizabeth oversees meet together monthly for training and to pray together. The students are used to taking classes at these nearby campuses, so there’s a lot of unity in the area. “Through the sharing of stories and testimonies, prayer movements have spread from campus to campus,” Elizabeth said. “Students have been encouraged to take risks, and they’ve visited each other’s campuses to learn from each other.”

The spiritual climate is different on each campus but the hunger to see God at work is growing. “There’s a lot of conviction being imparted from schools that are seeking God’s face more earnestly than others,” she added.

As she reflects on her study abroad experience as a student in New Zealand, Elizabeth is thankful for the opportunity to observe the world, and faith in a university context “down under.” She received a new perspective on campus ministry, and grew her appreciation for international student ministry and small group Bible study. It helped form the foundation of what she does today, and challenged her to grasp the scope of both God’s people and his desired work on the campuses of the Pioneer Valley area of western Massachusetts.