Coach of the Year Supports InterVarsity 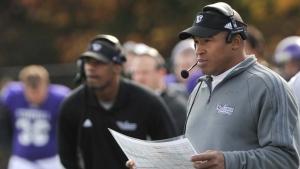 A highly regarded football coach picks InterVarsity to share in one of his post-season honors.

Robert Talley of Stonehill College in Easton, Massachusetts was named the NCAA Divisions II and III New England Coach of the Year by New England football writers following his team’s 8-3 record this year. He is also one of five coaches nominated for NCAA Division II 2013 Liberty Mutual Coach of the Year. The Liberty Mutual national award honors coaches who “best exemplify responsibility, integrity, sportsmanship and excellence both on and off the field.”

InterVarsity Christian Fellowship was named by Coach Talley as one of his three charities to receive part of the $50,000 award that will be directed by the winner of the Liberty Mutual title. “What I am most excited about regarding the Liberty Mutual Coach of the Year program is the opportunity to give back to some charities that the entire Stonehill football team supports on a regular basis," coach Talley said. Winners will be announced on January 6th at the BCS title game in Newport Beach, CA.

Maghan Perez, of Athletes InterVarsity, reports coach Talley’s connection to InterVarsity began through one of his former players, Mickey Miela, who is now on staff with Athletes InterVarsity. “Mickey, as a student athlete, started a Bible study on the football and track teams while he was an undergrad,” Maghan said. “He is now is planting athlete chapters at multiple campuses in Worcester.”

Anyone can help coach Talley win this honor by voting for him daily between now and December 22nd at CoachoftheYear.com or Facebook.com/LMCoachoftheYear. Twenty percent of each finalist's ultimate standing depends on fan votes.

Coach Talley is a 1991 graduate of Boston University and All America selection, who still holds the school record in tackles. He has held a number of coaching positions at both the college and professional level.