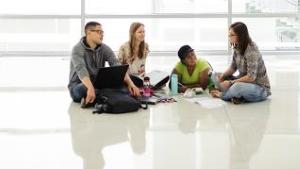 All over the country, curious students are being invited to Bible studies by their InterVarsity friends. And those who come to the Bible studies are open to considering a call to follow Jesus. But InterVarsity students are typically self-conscious about making that call to faith. Associate Area Director Jamie Ladipo is helping students on campuses in Wisconsin, Minnesota, Virginia, Kansas, and the Dakotas face their fears and make the call.

Several years ago, 2Calls2Faith became a rallying cry for New Student Outreach, as staff were encouraged to invite students to make decisions during the first few large group meetings of the year. Jamie was eager to get on board. The only problem was, she was planting a chapter at the University of Kansas at that time, and large group meetings weren’t happening.

But there was Raeann, a student with a strong faith and a willing heart. So Jamie and Raeann began working on how to do calls to faith in Raeann’s small group Bible study. Together they went over the Scripture passage, worked out a gospel presentation, and rehearsed an invitation for a response.

The Bible study went exactly as planned. Raeann’s presentation was flawless and her friends responded when she handed out note cards to indicate their decision at the end. Then Raeann handed the note cards to Jamie and left to attend a study group. There was no follow-up until days later. “That’s when I realized I needed to coach a much bigger process,” Jamie said.

And that led to today, where Jamie is not only coaching a bigger process, but also coaching a Lakes & Plains region Pilot Project involving 30 staff who are helping students on their campuses initiate calls to faith in their small groups. Jamie’s coaching is being done through a monthly conference call.

“Small groups are a place of real friendship and intimacy,” Jamie said. “It’s a great place for people to explore faith and come to know Jesus.” On the campuses that Jamie oversees as an Associate Area Director, she’s found that about one-third of the students involved in small group Bible studies are non-Christians.

Why are non-Christian students attending a college Bible study? “College is such a great place for trying to figure out what you believe,” Jamie said. “There are lots of people who are interested in exploring Christianity, either because they grew up in it and are trying to figure out if they want it to continue to be a part of their lives, or they didn’t grow up with it and are curious.”

A small group Bible study is a comfortable place to explore faith. “They can meet Jesus. They can meet Christians. It’s like getting to be on the inside,” Jamie said.

Not using insider language—often called Christianese—is key and helps the non-Christian feel more comfortable in the Bible study. Other ground rules that facilitate good conversation include being open and honest about where everyone is coming from and not being defensive.

The tension that Bible study leaders feel often centers on the invitation to faith. It’s going out on a limb. It’s facing the real possibility of rejection. That’s where coaching is so important.

Jamie helps Bible study leaders think through every eventuality. What will they do if someone is ready to follow Jesus, if no one is ready, or if someone starts to break down and has an emotional moment with Jesus? “We address the worst-case scenario fears, and that helps a lot,” she said.

Something that Bible study leaders don’t realize is that the non-Christians they invite to their study may actually expect to be offered an opportunity to make a personal decision about following Jesus. And the invitation may be a helpful, clarifying moment, both for those who are attending and for those who are leading.

“It’s not until we ask that we know where they are and if they’re ready or not,” Jamie said. “If they’re not being asked they may not be thinking about what questions they still have, how important those things are, and what they need to do to be ready.”

One of Jamie’s students, Ethan, had drifted away from one of his best friends after becoming a Christian at Kansas State University. Ethan felt that God wanted him to reconnect and invite his friend, Matt, to his small group Bible study. What Ethan didn’t know was that Matt was back home in Kansas City, waiting for his study abroad program to start.

But Matt drove the two hours to campus anyway. And when Ethan gave the call to faith, Matt responded. He was ready and eager to follow Jesus. In fact, he told Ethan, “If you would have told me this a year ago, my life would’ve been so much different.”

Students are catching on, and InterVarsity is growing as calls to faith become more common in large group meetings, in small group Bible studies, and in one-on-one conversations.

This 2100 video explores the challenges of making a call to faith in a small group Bible study on the campus of California State University Fullerton:

Small Group Calls to Faith from InterVarsity twentyonehundred on Vimeo.