Committed in Friendship: How Jesus Transforms Through Relationship | InterVarsity
Skip to main content
By Drew Larson

Committed in Friendship: How Jesus Transforms Through Relationship 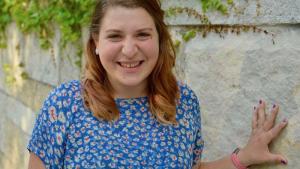 “I wouldn’t be a Christian today if it weren’t for you and InterVarsity.”

When Lara Archibald clicked on the new email she had just received from her former student Hannah, she expected a quick life update or maybe a short prayer request. Hannah was one of the first students Lara worked with when she started as a Campus Staff Minister with InterVarsity in 2011 at the College of Lake County (CLC), a large community college in north Chicago.

Instead, Lara read one of the most encouraging compliments a campus staff can get.

In 2011, Hannah was one of 19,000 students studying at CLC, a school where campus ministries had often struggled to gain any long-term traction. Lara connected with Hannah through mutual friends during her first week of planting a new InterVarsity chapter there, and Hannah quickly became a staple of the fledgling chapter, attending almost every group meeting and activity.

Despite that, her relationship with Lara grew slowly. Hannah was like many community college students, juggling a number of commitments in addition to her studies, such as family obligations and jobs.  She also struggled with outreach and cultural conflict. “[At first] she had a very hard time with our missional focus as a ministry,” recalled Lara. “She didn’t always know how to engage outside of her Christian bubble. We did a lot of conflict mediation and butted heads a lot.”

But Hannah stayed committed to her InterVarsity community, and Lara and Hannah stayed committed to each other. “We spent a lot of our time together talking about how to love people across differences, suspending judgment in favor of love, and pursuing reconciliation,” said Lara. “Our community loved her through many seasons of life, and she stayed with us even when it was uncomfortable and unpredictable. I still laugh when I think about how one of her best friends today was one of her worst enemies when they were student leaders together.”

Over time, Lara watched as Jesus began to transform Hannah’s heart. In 2015 she attended Soul Surf, a spring break evangelism trip in Florida, and returned to campus with such a newfound passion for reaching students with the gospel that she became the chapter’s evangelism and outreach coordinator. Later that year she survived a catastrophic car accident, an event that profoundly altered her spiritual maturity. “I’m not sure she was ever able to name what changed. But [after that] myself and our faculty advisor both noticed a substantial transformation in her pursuit of God and her witness to others,” Lara said.

It was the interpersonal connection between Hannah and Lara, however, that yielded the most transformational fruit. “Our mutual commitment to one another, despite great conflict, is what impacted Hannah the most,” said Lara. “One of the things she said to me was how meaningful it was that I never stopped pursuing her as part of the community, even when we didn’t see eye-to-eye.”

Since graduating, Hannah has not stopped asking God, “What’s next?” Her spiritual growth continues to be evident, and Lara has seen her settle, commit, and invest in God’s kingdom in ways that she wasn’t doing when they first met. “She’s pursuing Christlikeness even when it’s uncomfortable,” said Lara. “[Following Jesus] wasn’t just talk with Hannah. I learned just as much working with her as she says she did with us.”

Across the country, there are opportunities to be a part of transformative InterVarsity communities, like the one Hannah was so committed to. Find an InterVarsity chapter at your college by clicking the button below.

A New View of Community

Josh was done with Christian community, until he was convicted of his need for it.

By Matt Meyer
What Community Colleges Teach Us

"Numerous people are committed to me like family, and I am included in their families and celebrations. God has given me the security of knowing that I belong, I am loved, and I am accepted unconditionally."