Committed to Serving Others 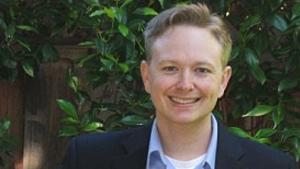 Being an entrepreneur can be similar to being a campus minister. Jon Paris, who has been both, points out that they both involve starting something from nothing, having a vision and sticking with it, and inviting people to find meaningful roles within the vision.

“Making a lot happen on a very limited budget is also something that all staff are adept at,” said Jon, who was an InterVarsity Campus Staff Member in California for 14 years. Budgeting tightly served him well after leaving staff, as he lived simply and worked long hours with his team, developing a to-do-list smart phone application called Astrid. Earlier this year Astrid was acquired by Yahoo.

Now, as a Yahoo employee, Jon still makes occasional visits to campus to speak at InterVarsity meetings and he is also connected with a Christian fellowship at Yahoo. But despite some of the similarities with his previous occupation, he admits, "The pacing of post-college vocational faith communities is different than something like InterVarsity.”

As a campus staff member at the University of California-Berkeley and the University of San Francisco (USF), and then a team leader at Stanford, Jon saw his role like that of the biblical prophet Samuel. "I felt like my main calling in life was to be one who anointed men and women to go out into the world to have an impact.”

As an entrepreneur, working with a team of mostly former InterVarsity students, he still focused on serving and productivity. "People have these profound moments of change where they make commitments before their peers and family but then the follow-through is not always excellent," Jon said. "We asked, how can we leverage technology to help us be who we are meant to be: happier, healthier, and more productive?”

The software that resulted from that philosophy has been received with open arms by the online community. Astrid had more than four million users when it was acquired by Yahoo in late April, 2013. "We are incredibly happy at Yahoo, and it's an honor to be here,” he said.

Developing tools to help people be more productive started before Jon left InterVarsity. In his spare time he developed several software tools to share with staff in a package called Graceful Tools. One tool can handle registrations for conferences, which involve thousands of InterVarsity staff every year. Another handles appointment confirmations. "If I wanted to meet with 20 student leaders in a given week, I didn't want to spend all my waking hours on email trying to figure out when I would meet with everyone, so I wrote a tool to do that,” he said.

Nikko Toyama-Szeto, a former InterVarsity colleague, remembers Jon as someone with a sharp strategic mind, but also a very social and outgoing person. “That was a fun combination that worked well at the USF campus as well as at the UC-Berkeley campus,” she said. “It was always fun working with him and he was always game for bouncing around ideas."

A Bible handed to him on a sidewalk outside his junior high school by a member of the Gideons played a major role in bringing Jon to faith in Jesus Christ. He made a commitment to follow Christ in high school. When he arrived on the UC-Berkeley campus as a freshman, he connected immediately with InterVarsity, and was invited to host a Bible study in his freshman dorm room.

Jon’s love for Bible study continued to grow as he participated in InterVarsity’s inductive Bible studies. "Coming into a university you are expected to be a world class scholar in your study areas, but I think many of us come in with an immature way of interacting with scriptures," he said. "One of the biggest things that InterVarsity did for me is that it really helped my faith mature through in-depth Bible study and thoughtful application.”

Whether in Silicon Valley or as a campus minister, Jon Paris has stuck with his vision of serving God and serving others.