The Cost, and the Reward, of Obedience | InterVarsity
Skip to main content
News
By Gordon Govier

The Cost, and the Reward, of Obedience 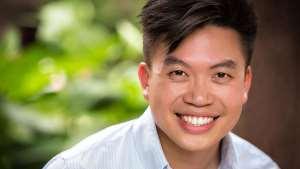 Four years after graduating from Massachusetts Institute of Technology (MIT), Derek Wu was on the fast track to become a vice president for a private equity firm, directing a team that managed $150 million in assets. He was also in a quandary, however, because he was finding ministry as an InterVarsity staff volunteer more fulfilling than the financial markets.

For two years he struggled with God’s call to become a full-time campus minister.

“When I finally said yes to Jesus, to coming on staff, it was in part out of obedience but also because I realized I wanted more hours to spend on campus,” he said. “I couldn't do it with the ten hours a week that I was giving, I wanted to do it full-time.” But coming on staff meant not only financial sacrifices, it also meant sacrificing his family.

Derek grew up in southern California, the son of Taiwanese immigrants. When he came to MIT as a freshman, he wore a cross around his neck, given to him by a friend. He met some InterVarsity students, who helped him settle into campus housing. They invited him to attend chapter meetings of the Asian Christian Fellowship (ACF), which he did sporadically. He was indifferent towards Christianity.

The following year his fraternity big brother called him on his indifference. ACF became his community on campus, and he began to seriously consider the Christian faith. He was particularly intrigued by the mention of hope in Jesus because he didn’t see much hope in his life. Due to a difficult childhood, Derek was dogged by feelings of worthlessness.

He recognized that a university education offers a kind of hope that results in stability and comfort if good grades in the right classes lead to a successful career. But that was not the kind of hope that attracted Derek. “At MIT the hope was in technology,” he said. “The great hope of humanity is education but it doesn’t touch the soul.”

His junior year he went to ACF’s fall conference at Toah Nipi, InterVarsity's retreat and training center in New Hampshire. That weekend he heard the story of Jacob, who was called a deceiver in the book of Genesis, and was dogged by that identity for much of his life, until God renamed him Israel.  “There was something about the idea that God could give me a new identity in that story that would set me on a new path,” he recalled.

Derek’s yes in response to God’s call to a new identity in Jesus Christ unfolded slowly, as he continued to attend large group meetings and Bible studies in his fraternity for the rest of his time at MIT. He graduated with a degree in Finance and began the career he had prepared for.

That was 2005, the year that Hurricane Katrina devastated New Orleans. When InterVarsity’s New England chapters began sending teams to Louisiana to help clean up, his best friend, still a student, invited him along. Derek returned to Boston after the trip with a sense that God wanted to give him an opportunity to do something that wasn’t for himself. So when he was asked by an InterVarsity staff minister to disciple a couple of InterVarsity students, he said yes.

That meant that Derek’s first InterVarsity leadership experience came after his student days were over. “Those volunteer years were actually very formative,” he said. His mentoring role continued to grow over the next three years and he invested considerable time helping the MIT chapter improve its outreach programming so that it could better connect with students who were indifferent, as he had been.

And then he realized that God was calling him to join InterVarsity staff fulltime. He resisted, praying, “Lord, you know my heart; let this pass.” But he sensed God say, “This is not about optimizing and stewardship. Are you going to steward your life for me or are you going to say yes?”

When he finally said yes, he had to tell his parents, who had moved back to Taiwan. “The conversation I had with my parents was one of the most terrifying conversations I’ve had in my life,” he said. While he called them, a small group of his friends interceded in prayer in the next room.

“Why are you doing this to us?” his parents responded. “You are shaming us.” He was disowned. The friends who had prayed for him in the next room became his only family.

Derek understood that parents who have sacrificed to send their child to college can find it hard to accept that their son or daughter plans to work for a non-profit ministry that asks its staff to raise their salaries through donations from family, friends, and other contacts.  He hoped that his parents would eventually accept his decision.

As his ministry on the MIT campus thrived, Derek carried a heavy burden. For five long years he prayed for God to restore his relationship with his parents. They wouldn’t take his calls; there was no sign that they would relent. There appeared to be no chance that they would open their hearts to God’s mercy.

Then, around Christmas in 2014, Derek called his parents to tell them he was getting married. They listened. And then they talked. The family bond was restored. Last year Derek and his wife visited his family in Taiwan. His father told them that they were considering moving back to California, and his mother was even considering going to church.

New England has a reputation of being spiritually cold, more so than other regions. But as Derek—InterVarsity’s Boston Divisional Director—leads ministry in the region, he sees God at work in the lives of more and more students, just as in his own life. “I think InterVarsity, God willing, is releasing a new generation of leaders that can help prepare the church for revival,” he said.

Derek is seeing it happen; the seeds of revival are taking root on New England college campuses.