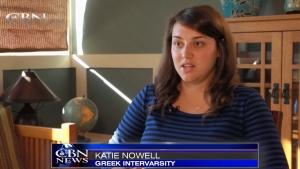 As the saying goes, “If you’re not part of the solution, you’re part of the problem.” The problems with sex and alcohol on campus have been growing for decades, and were pushed into the limelight again this month by the University of Virginia rape story reported by Rolling Stone magazine.

Greek InterVarsity is a part of the solution on many campuses by being faithful to the gospel message. On the University of Virginia campus, still in shock from the pain of all of the media attention, Christian fraternity and sorority members are sharing hope and comfort.

"It's really hard to talk about the brokenness," Greek InterVarsity Campus Staff Member Katie Nowell explained to CBN News. "It's really hard to talk about this culture and that our brothers and sisters are being assaulted like this and we hate this. But, we know that we serve a God who brings healing and brings justice and hates those things, too."

On campuses across the country, Greek InterVarsity staff and student leaders are being encouraged to initiate conversations that may be difficult and uncomfortable — and listen well to those who have been hurt by the excesses of the campus culture.

At the University of Utah, Greek InterVarsity student leader Mitchell Cox is working with the Rape Recovery Center through his fraternity Beta Theta Pi to sponsor sexual assault prevention forums on campus.

"As a fraternity, our partnership with the Rape Recovery Center is so important to us because not only are we able to positively impact the community, but we are able to dispel the negative stereotypes that are often associated with fraternity life,” Mitchell said on the Dr. Phil syndicated television program.

For his efforts Mitchell was recognized as a winner of the iAspire Grant by the Robin McGraw Revelation Foundation, which is associated with the Dr. Phil talk show.

Greek InterVarsity has chapters on 29 campuses across the U.S., and works with more than 3,000 students on a total of 81 campuses.