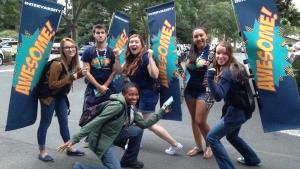 New Student Outreach (NSO) season at the beginning of the school year is always busy, but for InterVarsity staff and student leaders on California State University (CSU) campuses, NSO was crazy busy this year. CSU derecognized many chapters because InterVarsity’s leadership selection process requires that their chapters be led by Christians, which violates CSU’s new non-discrimination policy.

So our chapters on most of the CSU campuses continue to operate but without the ability to participate in student organization fairs and enjoy the other perks of official recognition, such as free use of on-campus meeting spaces. CSU chapter life has gotten more creative but also more expensive.

Creatively, the use of backpack banners has become a new way to contact students and tell them about InterVarsity. A photo of Sonoma State students wearing backpack banners (above) taken by Jenny Klouse and posted on Facebook was shared on the InterVarsity webpage and then picked up by a number of news outlets.

Even though CSU has so far been unyielding on the new policy in spite of widespread criticism (more on that later), and some chapters need outside financial assistance to cover the cost of room rental, campus ministry continues. Some of our staff have had positive experiences with campus officials and we have already seen great responses from students to the gospel message this year.

Gent Grush at CSU-Los Angeles dropped off a student on campus with banner backpacks, flyers, and contact cards, and went to park. “Upon my return I discovered we had already been asked for papers for our group’s presence on campus. We had none. I thought we were busted,” he said. “I began to talk with the woman asking for papers and introduced myself when she responded, ‘Oh you’re Gent!’ And then she gave me a huge hug.”

It turns out that this was the person that Gent hadbeen calling almost daily since early August to secure rooms and promotion space on campus in the face of derecognition. “She immediately began to help us know what we can and cannot do and extended much grace because of her understanding for our situation,” he said. “She personally walked me to the Public Affairs Office to help me apply as a non-profit group to promote on campus. She was a blessing, a person of peace in the midst of the changes on campus.”

On the way to the Public Affairs Office the pair stepped onto an elevator, that also happened to be occupied by the CSU-LA president, William Covino. “She introduced me to the president and shared with him that I represented InterVarsity on campus,” Gent reported. “I shook his hand and he said thank you for serving our students.”

Students Respond to the Gospel Message

After all of that, the CSU-LA InterVarsity students easily made contact with 25 new students in their first
hour and a half on campus as a non-profit group. The new contact methods seemed to work well on other campuses too; at California State University-Fullerton 338 students filled out contact cards.

As these new contacts attended Large Group meetings, many responded to the gospel. At Sonoma State, 27 students made first-time or adult decisions to follow Jesus the first week. The next week 15 more students came to faith in Christ at Sonoma.

While campus ministry continues at the CSU schools, the CSU situation has received a lot of media attention, overwhelmingly in support of InterVarsity. The links to news stories and commentary on our CSU derecognition resource page expand on an almost daily basis; the much anticipated coverage by the Los Angeles Times gave a balanced treatment of the issue.

Here are quotes from some of the other coverage:

“The bigger, and ongoing, issue is the continual sanitization of unacceptable religious voices from universities. It’s ironic—those who champion nondiscrimination, in the name of nondiscrimination, are creating rules that push out those who “discriminate” based on biblical belief statements.”

“This is a group known for such high-pressure tactics such as inviting students to inductive Bible studies. Presuming one likes people who tend to be thoughtful, respectful, and service-oriented, these are about the least annoying evangelicals non-Christians are likely to meet. On the other hand, IVCF chapters want Christians to lead those Bible studies. The nerve. Seriously, anyone who cannot stomach these evangelicals needs to rethink that lip service about diversity and inclusion.”

“CSU has helped set off what is likely to be a chain reaction of embarrassing events destructive to free thought, free inquiry and free association at America’s colleges and universities.”

“Attendance and membership should be open to all, but the basic tenets of a group’s existence are at risk to be altered if people with differing opinions are allowed to come in and assume leadership. The authentic character and values of these groups must be protected.”

“…the policy is a gratuitous insult, forcing groups to deny their core values and sign symbolic statements they don’t really believe. It’s a way for the university to pledge allegiance to diversity without embracing pluralism.”

“This policy guts the free association right that was enshrined in the First Amendment precisely to protect minority or unpopular views.”

“The very existence of the religious organization is tied up in the selection of those who teach its message and practice its doctrines. Once the state begins interfering with those decisions, the ability to exercise one’s religious beliefs freely is fundamentally undermined.”

“This notable exception—that sororities and fraternities can discriminate on the basis of gender—is illustrative. The university seems to accept that the essence of a sorority and fraternity is gender, while refusing to recognize that the essence of a religious club is, well, religious belief. Just as a sorority required to admit men would no longer be a sorority, so a religious club run by non-believers would cease, by definition, to be itself.”

“The ‘all comers’ logic tramples on these principles. It ignores a commonsense recognition that the university ought to be about inquiry, not orthodoxy. That is a loss for the university, and a loss for us all.”

While InterVarsity was the first campus Christian group to be derecognized, other Christians groups such as Chi Alpha and Athletes in Action are also being derecognized. In addition, a grass roots student coalition called CSU Student Organizations for Free Association (CSU SOFA) has sprung up on two CSU campuses to seek an end to CSU Executive Order 1068. Please pray that sanity will prevail and that the CSU policy will be rescinded or changed to allow faith groups to choose leaders who hold to the group’s beliefs.