A Day of Mourning and Reflection 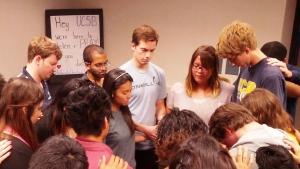 InterVarsity staff and students on the campus of the University of California Santa Barbara (USCB) participated in the Day of Mourning and Reflection on Tuesday, May 27, 2014, declared by UCSB Chancellor Henry Yang, following the tragic violence that shook the campus community four days earlier.

A Santa Barbara City College student living in the Isla Vista community adjacent to UCSB went on a rampage killing six UCSB students before taking his life. Classes were cancelled for the day on Tuesday and a memorial service organized by faculty, staff and students was held at 4pm in Harder stadium on campus.

The InterVarsity chapter helped coordinate a joint campus Christian fellowship service of prayer and worship that was held at 7pm on Tuesday. Melissa Nguyen, InterVarsity’s team leader at UCSB, said that chapter members also went into the streets of Isla Vista to pray with students who were open to prayer.

"God is God even in tragedy," Melissa said. "We prayed for healing for the injured, and their families. We prayed for comfort and no fear for the students. Lastly we prayed for salvation because the hope we have is stronger than the enemy's plans." Melissa is concerned that while the memorial service was moving it may have left the UCSB students empty, without an adequate response to the tragedy and the pain they are dealing with.

The Lord is Near to the Brokenhearted

Tom Allen, InterVarsity’s Regional Director for Southern California, observed that a tragic event such as what happened at UCSB touches all InterVarsity staff in their work of mentoring, discipling, pastoring, and loving students.

“As the parent of a University of California student away at college, I find it particularly unimaginable and heart-breaking,” he said. “The Psalmist reassures his audience that the Lord is near to the brokenhearted, saves the crushed in spirit, and binds up their wounds (Ps. 34:18, 147:3). This week let us pray for the Lord’s mercy within the UCSB community and for the InterVarsity chapter to be a witness to this God who heals the brokenhearted.”