"Every Year I Try to Start a New Thing" 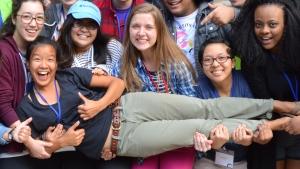 Benita Ki spent the first half of her junior year of college dodging invitations to InterVarsity events. Campus staff minister Caleb Kytonen was planting a chapter at the University of Puget Sound (UPS) and kept inviting her. “She was a good organizer and knew everyone on campus,” he recalled. But Benita was busy with studies, sports, and everything else and didn’t need another activity on her calendar.

Benita had heard about InterVarsity’s Urbana Student Missions Conference, however, and decided to attend  Urbana 09. It changed her perspective on InterVarsity and on her Christian faith.

“I was surprised by the holistic perspective that Urbana offered on the gospel,” Benita said. “I realized there was more to following Jesus than going to church. I was challenged to not just think about missions in a one-dimensional way, but to love the poor and people on the margins, and give my life to the mission of God.”

Because of Urbana, Benita signed up for InterVarsity’s Global Urban Trek, a summer experience exploring God’s global mission in Kolkata, India. Then, returning to UPS for the fall semester of 2010, she became an InterVarsity small group Bible study leader. “I was a first semester senior having the experience [typical] of a sophomore leader,” she said.

That semester Benita and fellow chapter members partnered with other campus organizations to hold a campus-wide human rights fundraiser to help combat modern slavery. “It became a model for the school in terms of collaborative events,” Benita said. “It was amazing how many people showed up. We raised over 3,000 dollars.”

Still, she was surprised when Caleb invited her to join InterVarsity staff after graduation. She decided to fill out the application just to keep her options open but then became intrigued by the opportunity to plant a new chapter at Pacific Lutheran University (PLU). “The idea of starting a new thing was what interested me about saying yes to the internship,” she said.

Planting a chapter turned out to be a perfect fit for Benita. She was surprised at how well the first year went. Benita met students who were interested in deepening their faith who weren’t connected to other Christian groups on campus. It was a slow process, but the chapter gradually began to expand each year as Benita worked with the students to reach more parts of the campus. “Every year I try to start a new thing,” she said.

In recent years she has reached out to Black and Latino students on campus, as well as developed special programming for the large number of nursing students at PLU. One of her biggest challenges is figuring out how to meet the spiritual needs of students who are in vastly different places in their spiritual development. This year she’s starting a series of meetings for upperclassmen called Adulting, focusing on budgeting, generosity, finding a church, and other issues that follow graduation.

Benita also leads InterVarsity’s Tacoma Urban Program each summer, partnering with local nonprofit organizations to help students grow in their discipleship by focusing on justice and loving their neighbors. She’s now developing a yearlong program for those students who want to stay involved on a regular basis.

There have been some bumps in the road along the way. Last year, five years into the plant, everything seemed to fall apart. People were dropping out, small group Bible studies folded, personalities were in conflict. “I learned the hard way to release it to Jesus and trust that he’s the one who’s taking care of it,” she said.

This year is off to a much better start. New Student Outreach went very well; several hundred students showed interest in getting involved in InterVarsity.

Connecting with students at the beginning of their college careers is an InterVarsity priority, but Benita wants to make InterVarsity work for everyone, juniors and seniors as well as freshmen. She remembers her own experience.

When Benita reflects back on her college years at UPS she sometimes wonders what her life would’ve been like if she had been involved earlier in InterVarsity. “I think about my friendships and my quality of relationships with people,” she said. “Would my relationship with Jesus be deeper now if I would’ve started earlier?”

What she does know is that Jesus will meet with anyone, anywhere they want to meet. And the college campus is one of the best places to make life-changing decisions.