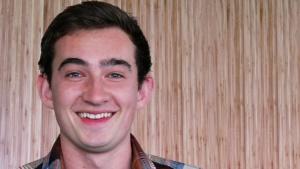 “Often, following Jesus can be very discouraging, especially in an atmosphere such as college,” said Isaac Redinger. “During my freshman year, I often felt ostracized because I didn’t want to take part in the unhealthy lifestyles that were around me in the dorms.”

Before coming to college, Isaac had grown up in a Christian family, where his parents encouraged his spiritual growth. Isaac remembers beginning a personal relationship with Jesus when he was very young. He and his family attended church in Madison, Wisconsin, and his family took trips to Inter-Varsity Canada’s Ontario Pioneer Camp every summer.

“While participating in those summer camps, I started to identify my leadership skills through training, and I recognized the importance of being in an atmosphere that would grow my faith,” said Isaac. “It was during my middle school years, I remember, that my relationship with God hit a turning point, and [since then] I’ve been growing to know him more and more each day.”

Following in His Sister’s Footsteps

“As I got involved in InterVarsity, I was thankful for the ways that God was surrounding me with genuine friends who were living for God,” said Isaac. “Over the years, InterVarsity has showed me the importance of living in community with others—it not only strengthens my faith, but this community encourages me to reach out to others, to learn more about who God is through Bible study, and also to have fun!”

One of Isaac’s most memorable times with InterVarsity came at the beginning of his sophomore year. He and his roommate felt led to host a weekly Bible study out of their dorm room, even though they only knew of one friend from another floor who might be interested.

Through the first weeks of the semester, Isaac saw God bring 12 male students who wanted to learn more about Jesus to their Bible study.

“Not only were these guys committed, but the friendships that developed from this study were awesome,” said Isaac. “I was amazed the most after realizing that much of that Bible study formed as a result of prayer—it was very humbling to realize that it was not us who were bringing people together, but it was God moving in the lives of our friends.”

Isaac not only became more confident in his faith; he also began to recognize the ways that God was answering prayer and demonstrating his love through this small group of male students.

After leading the Bible study this past year, Isaac sensed God inviting him to take another step of faith by going on an InterVarsity Global Project over the summer, which he just completed. "I saw God open up doors on our trip that I didn't think would be possible!" he said.

Returning to campus for his third year of studies, Isaac is “excited to see what God has in store.”

“Through InterVarsity I have grown a lot as a leader,” said Isaac. “Not only have I learned so many amazing things through manuscript Bible study, but I’ve realized that leading a Bible study has strengthened my reliance on God.”

As Isaac and countless other InterVarsity student leaders return to campus, we trust that God will bless and guide each of them as they share the good news of Jesus Christ with friends.