Faculty: The Key to Revival on Campus? | InterVarsity
Skip to main content
By Nathan Peterson

Faculty: The Key to Revival on Campus? 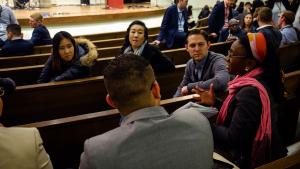 “God has assembled quite a few Christians here. I don’t know what he wants to do, but I would love to discover it with you.”

George Stulac found himself saying that a lot after joining InterVarsity’s Graduate and Faculty Ministries (GFM) as a Campus Staff Minister. It felt like each new Christian faculty he met in the St. Louis area would recommend another faculty contact he hadn’t known about before. Since starting back in 2015—after investing 38 years as a pastor—George has been able to connect with over 50 Christian faculty at his alma mater, Washington University in St. Louis.

The odd thing was that many of them didn’t seem to know each other.

George came to recognize this phenomenon as the silo effect. Simply put, many professors find it difficult to build relationships with other faculty outside of their department.

Dr. Jill Pasteris, a professor at Washington University in St. Louis, speculated about the reason for this, saying, “We just get too focused and don’t reach out enough to other faculty, in part, because we are not sure of what common interests might bring us together.”

Several professors shared with George some of the challenges that come along with the silo effect, with the first, most obvious one being isolation. It’s also easy to compartmentalize, to see faith and academics as separate. Even when professors seek to integrate their Christian faith into their work, navigating university structures can be quite demanding. Others admitted to George that the influence and authority they held on campus set them up for temptations they were sometimes not prepared for.

In all this, George recognized an opportunity to serve and help. “When I began to introduce [faculty] to each other, they began to meet together and build relationships,” he said. “I saw opportunities for collaboration and mutual help to blossom naturally among some faculty whose paths otherwise wouldn’t cross.”

George invited a group of faculty to Urbana 15, where they met together to hear from Bobby Gross, the Vice President of GFM, and Dr. John Inazu, a Washington University professor and InterVarsity Board Member. “When they attended Urbana sessions, they heard about being missional people,” George said. “That seemed to stir a desire to do that together on campus and not be content with the silo-ing and isolation. [They believed] that there was more that could be done to have a redeeming influence on the university.”

Some faculty at Washington University in St. Louis returned from Urbana inspired to form an InterVarsity Faculty Fellowship and begin meeting twice a month. “I enjoyed watching these faculty form friendships and initiate cooperative ventures together for a Christian presence and witness on campus,” George said.

After that initial fellowship was planted, he has continued connecting faculty and has helped to establish three more fellowships in the St. Louis area. George now meets with a number of professors individually for spiritual formation and also leads faculty Bible studies. “I learned so much,” one professor described their time spent in the Word. “I felt better equipped to understand the passages and got insights on how to approach Scripture.”

“George has supported my desire to be an example and share Christ in my academic work life,” said another.

More and more faculty have sensed the call to be more active in their faith. “Because they’re in positions of influence, [their openness about their faith] affects the thinking, the ideas of the university,” George said. “The gospel becomes more a part of the campus-wide discussion of what is true and real and good.”

At Lindenwood University, several professors have designated their offices as prayer stations, public places where anyone can come to pray or receive prayer. And when one philosophy professor finished his PhD, the fellowship decided to throw a party, inviting all faculty, both Christian and non-Christian. Around 30 professors gathered to hear about and discuss his dissertation on the existence of God. “They had a great time,” George said. “They loved engaging with each other.”

In many ways, the ministry taking place within these four InterVarsity Faculty Fellowships parallels the greater work God is doing among St. Louis faculty.

“There are a lot of Christian faculty members who want to engage more deeply with ministry,” said Washington School of Medicine’s Dr. S. Joshua Swamidass. “When we [as faculty] can actually integrate what we’re thinking and doing, we can actually change how a whole field thinks about things.”

For much of his childhood, Dr. Swamidass admits he focused on “building [his] faith on the sinking ground of scientific arguments,” as he writes in his article “Finding Confident Faith in Science.” But over time, he began to realize there was someone bigger than science: Jesus, whose presence and power was greater than what he found in science.

Alongside his scientific work, Dr. Swamidass launched Peaceful Science to find common ground around questions of origin and science. He has spoken at many venues, like Urbana 18 and Veritas Forums, founded the nonprofit, and wrote the InterVarsity Press title The Genealogical Adam and Eve.

Dr. Swamidass also is one of the faculty fellows at another nonprofit, The Carver Project (TCP), founded by faculty to “empower Christian faculty and students to serve and connect university, church, and society.”

TCP continues to gain momentum with faculty dinners and discussions across departments, professors coteaching and developing new classes together, and reading groups being hosted for students as well as mentoring opportunities being offered. The past two years, they have hosted Carver Conversations for the larger community, inviting guests like Tim Keller, Lecrae, Sara Groves, and Makoto Fujimura to discuss topics like “Christian Witness in an Age of Fracture” and “Baptizing Our Imaginations: Art and the Divided Church.” The next Carver Conversation is scheduled for April 3, 2020.

George has been thrilled to witness TCP’s development and serve them through leading Bible studies, providing pastoral care, and helping plan their annual faculty retreat. “George has been an indispensable partner to The Carver Project: his words and actions demonstrate again and again that he knows faculty, he knows Washington University, and he knows Jesus,” said Dr. Inazu, who is also one of TCP’s founders.

Reflecting on the future of his own ministry and God’s greater work in St. Louis, George has begun to gain a clearer sense of what the Lord may be doing by gathering so many faculty together.

“I’ve come to believe that faculty are perhaps the key to all the things InterVarsity does on campus,” he said. “With their longevity on campus, compared to students who graduate, and by their positions of influence and respect on the campus, faculty have the potential to be the greatest influence for revival on our campuses.”