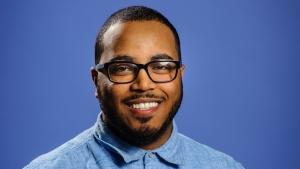 Tim Holmes was praying for a miracle. In order to stay in the music program at City College of New York (CCNY) he had to maintain a B average. He was at B minus. His professor told him, “You need a miracle to pull off a B.”

He didn’t get that miracle. Even though he had studied harder than he had ever studied before, he had to drop out of the music program and switch his major to English. His grades improved immediately, but still it was a tough decision. “I had no idea what it would do for my career,” he said. “But I felt strongly that was what God was calling me to, so I did it.”

The music program was what had led Tim to CCNY in the first place, and to InterVarsity.  Christian Hip-hop artist Andy Mineo was president of the CCNY InterVarsity chapter when Tim contacted him about the CCNY music production program. He invited Tim to InterVarsity and Tim got involved as soon as he arrived on campus.

“InterVarsity was the place where I learned to live for Jesus with abandonment,” Tim said. He had come to faith in Christ as a teenager and had been active in his church, but he didn’t have a lot of role models his own age. That changed when he connected with InterVarsity and met other Christian college students.

“They were just like me in age and background, but they loved Jesus in ways I’d never seen before,” he said. “I learned that everything in my life belongs to Jesus, including my money, including my major, including my job, including my relationships. And I saw people modeling that in a way that I not only admired but I also learned from.”

During his five years as a student at CCNY Tim held a variety of chapter leadership positions. He credits InterVarsity for helping him learn what it takes to be a good leader and how to lead well. In October, 2013 when InterVarsity sponsored the Price of Life festival in New York City, Tim served as event coordinator, arranging 12 events in nine days to raise awareness about human trafficking and share the gospel.

During his third year at CCNY, Tim attended Fall Conference and was confronted with InterVarsity’s NYC staffing situation: approximately three dozen campuses were unstaffed. “Every part of New York City deserves to hear the gospel,” he said. “That staffing level is unacceptable.” His heart was heavy, and he began to wonder if God was calling him to come on staff with InterVarsity.

But for Tim to join InterVarsity staff would take another miracle. Because when he talked the possibility over with his soon-to-be fiancée, Jocelyn, she said, “Nope, that is not what God is calling you to do,” and gave him a list of reasons why.

He truly believed that God had called him to marry Jocelyn. And he refused to take a job that would create tension and discord within his family. He also vowed he wouldn’t be manipulative and try to convince her on his own. He prayed that God would show both of them the best course to follow.

A year-and-a-half later, Tim and Jocelyn were at an InterVarsity chapter camp where Regional Director Jason Gaboury presented the New York City staffing situation. Afterward Jocelyn turned to Tim and said, “I think we should do it.”

Tim was surprised. “I have no idea what changed,” he said. “Something about being in that room shifted her heart towards what God was doing in my life and what God was calling me to do.”

Tim came on staff and in August of 2015 began ministering on the campus of the John Jay College of Criminal Justice, part of the City University of New York (CUNY). The students Tim talks with are almost all headed toward a career in the legal system, in some form or another. Most are motivated to help people and try to make the world a better place. It’s a unique and mostly positive place for ministry.

“The values of how they have been raised have taught them to want to be people who are creating hope and peace for those around them,” Tim said. “So talking about a God who has that same heart and calls us to do that in the world aligns itself very closely to what they are already feeling, even if they have never thought about the idea of who God is.”

Students at John Jay are responding to the gospel. Tim is thrilled that last year 28 students came to faith in Jesus Christ, double the number of the previous year.

Like most InterVarsity field staff, Tim is responsible for finding ministry partners who will prayerfully and financially support his ministry. As he has developed these relationships, he has discovered the value of being increasingly dependent on God.

“What I’ve learned is that abundance is hidden in Jesus,” he said. “Campus ministry is an invitation to be with Jesus. It’s not an invitation to maximize our gifts, even though we want to see that happen. I think that’s been making all the difference in how I engage with the world.”

Tim still occasionally writes a song or a spoken word piece as a creative outlet. And every day, as he ministers to students, he expects miracles to happen. God is at work at John Jay College.