Finding a New Frequency—Breakthrough in the Bible Belt 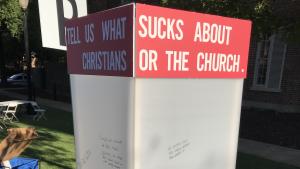 The University of Alabama (UA)—Alabama Area Director Clayton Cullaton slumped against the folding table, set up in the middle of the student center. In his hands was a whiteboard with “What’s your purpose?” scrawled in red marker.

Crowds of students passed him by, earbuds in, eyes straight ahead. Clayton had managed to get curious looks from a couple people. But even after he waved them over, most kept going.

He glanced down at the whiteboard with a sigh. This year’s New Student Outreach (NSO), like the past few before it, was off to a frustrating start.

Two InterVarsity student leaders dropped by the table, and Clayton asked for their honest feedback about his whiteboard question. Neither of them thought it would catch the attention of many students.

Clayton looked thoughtful. Then his expression abruptly changed. He erased the whiteboard, scribbling furiously. Reading over his shoulder, the two student leaders nodded to each other, eyebrows raised.

Within a minute, a student walking by caught sight of Clayton’s new question. He did a double take, pulled out his earbuds, and walked straight up to the table.

The state of Alabama has long been on Clayton’s heart. During his undergrad at the University of South Florida, he prayed at an InterVarsity gathering that God would call InterVarsity campus ministers to Alabama, a state with no chapters. And Jesus began answering that prayer—in part, by prompting Clayton to join InterVarsity staff.

Since moving to Alabama in 2015, he and a small team of campus ministers have begun the work of establishing ministry in underserved corners of Alabama’s 50 campuses, particularly desiring to start work on the state’s 25 campuses with no known campus ministry. It hasn’t been easy. They've encountered a unique challenge to campus ministry in the South: cultural Christianity.

People have received so many invitations to Bible studies and church groups that virtually everyone who identifies as Christian—even if he or she isn’t growing in faith—is already connected with some kind of ministry or doesn’t see a need for it. And those who aren’t Christians have stopped acknowledging invitations altogether.

Michael, a senior at UA, has seen this play out for the last three NSOs. “We’ve gotten lots of people’s contact information, and they may sound interested,” he said. “But really they’re not interested at all. [They] feel like they have to say yes just to be courteous.”

Clayton compares this experience to hearing loss, when a person’s brain blocks out the constant ringing in the ears until he or she eventually stops hearing it altogether. “[Many] people in the South have a kind of hearing loss when it comes to the message of Jesus,” he said. “They’ve tuned it out so much so that you almost have to create a different frequency for them to hear.”

As he walked up to Clayton’s NSO table, the student’s expression was a blend of shock and confusion. Clayton glanced down at the whiteboard he held, starting to wonder if he’d just made a mistake asking this new question: “What sucks about Christians or the Church?”

“What do you mean by that?” the student scowled. “Why are you so negative?”

Clayton took a deep breath, “Well, for one thing, there are plenty of people around you who think this way. We should engage them.”

“Oh, I thought you were just a hate group,” said the student, a little quieter now.

“No, we’re just trying to be real. As Christians, we know we’re not getting it right all the way.” The student nodded and headed off. As a few more students caught sight of the whiteboard and walked right up to him, Clayton could almost feel something shift.

“Thank you,” “This is interesting,” “Good job!” and “I’ve never heard anyone from the Church be open to self-criticism before” were just a few of the comments received. Dozens and dozens of people from all walks of life—Christ-followers frustrated by fellow Christians’ lack of openness about past historical mistakes, many who had been hurt by the Church, Muslims, Mormons, and everyone in between—stopped to engage.

Witnessing this dramatic shift, Clayton’s two student leaders looked at each other. “We need to make this bigger.”

A four-sided foam board pillar, eight feet tall, a bright red sign at the top saying, “Tell us what sucks about Christians or the Church.” People couldn’t not see it. After a quick trip for supplies, Clayton and a few InterVarsity students finished “the pillar” in time for UA’s organization fair.

They watched students walk past it, heads tilted, obviously reading the question. Many took the time to jot down their answer across its walls.

Jhamal, a senior student leader, was deeply moved as another student shared how her ex-boyfriend’s mother called her demonic and blatantly dehumanized her. “Through her eyes, I saw the sorrow God felt at the things that have been perpetrated against all the people who wrote on the pillar by those claiming to act in his name,” he recalled. “The pillar showed her that there were followers of Jesus who actually cared, [who] could recognize the problem with her story and longed for restoration from these warped mindsets, institutions, and beliefs.”

After the organization fair, Clayton and his students moved the pillar into the student center for the next two weeks. Many people continued to return, bringing their friends to see what new things had been added, including “Christianity is not a podium sport, where you look down at others” and “I don’t feel like it’s okay to be around because I disagree with you.”

“So many people were there who were either kicked out of church or ostracized or made to feel unwelcome,” said Summer, another senior student leader. “This was a moment for them to address that brokenness and for us to try to restore them, saying, ‘We acknowledge this wrong. We care. And let’s talk about it.’”

With so many students intrigued by the tower—generating the deepest conversations Clayton’s experienced in his four years of ministry—he and his students decided to host a follow-up forum.

Dozens came to hear Clayton share the biblical narrative. “We addressed what happens when Christians or the Church step outside of God’s story,” he said. “[Christians] were supposed to be signposts and a foretaste of new creation, but instead we [sometimes] end up sliding back into rebellion and trying to make a kingdom for ourselves.”

He went on to share about God’s plan of redemption and new creation. Afterward, one student’s hand shot straight up. He said that he was an atheist and had always thought that Christianity essentially meant going to church and giving it more power. Hearing the full biblical story was extremely refreshing, he said.

After the forum, a small number of new students signed up for future InterVarsity events. And in the following weeks, some visited Bible studies and attended the chapter’s Fall Conference. Several atheist students also told Clayton they’d be interested in meeting to dig deeper into Scripture.

This experience has also affected InterVarsity students, sparking more follow-up conversations with their own friends. And with graduation fast approaching, Michael appreciates how this event, along with his overall experience with InterVarsity, has prepared him to better engage with people in the workplace and church.

It’s allowed Summer to realize that helping others work through their past Church hurt is a critical first step in rebuilding their trust with Jesus. “I understand people more,” she said. “This is the reason why they’re not coming to our Bible study. These people are dealing with major pain.”

Looking back on the ways God has been at work at UA this past semester, Clayton recognized, “People were restored in the image of God. . . . They looked another student in the face, heard a real problem, empathized with them, and invited them to the truth. In that, they became more fully human. . . . They’re going to look at the Bible and Christianity differently.”

And though he believes that much of the fruit of these conversations has yet to come—and may not be seen by InterVarsity—Clayton and his students have been refreshed and renewed in their purpose, confident of the good work that Christ has called them to.

Prayers and Planting at Pembroke

“I’m walking on a campus that’s been saturated in prayer and I could tell,” Meg said.