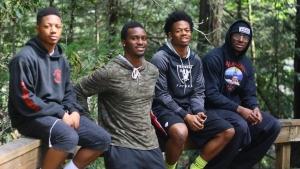 The front page newspaper headline read: “Neighbors Complain About Football Players.” Trash, noise, property damage—all blamed on Mendocino College athletes. The Black football players came from out of state to play ball in this majority White town. And now, just one month into the fall semester, their neighbors were signing a petition to evict them.

Six months earlier my colleague Troy Tisthammer and I had driven an hour-and-a-half to Mendocino College, located in the small Northern California town of Ukiah, to accomplish our goal of visiting every campus in our area. While there, we met the assistant football coach, who had led some Bible studies for the team, but he was moving out of the area.

He connected us to the head football coach, Frank Espy, who welcomed our partnership in spiritually developing his athletes. Now, here we were six months later in the middle of a controversy between the college and the town!

How were we going to engage as Athletes InterVarsity? Our vision is to see athletes and coaches transformed, collegiate athletics renewed, and world-changers developed. We realized that what happened next could influence a whole town.

Answers from the Bible

To guide the football players spiritually through this conflict, we selected an InterVarsity Bible study series called Awkward, which aims at helping people turn awkward situations into spiritual conversations. Over the next month, we looked at stories of three awkward situations in Scripture.

The first week we studied the story of the woman caught in the act of adultery in John 8.

The players could relate. They felt similarly exposed and shamed as everyone was talking about them in the public square. As White InterVarsity staff, it was painful for me to listen to their personal stories of feeling alienated and unwanted in this small town.

The next week, Troy led a study in Matthew 20, where Jesus addresses power dynamics and servanthood as the disciples argue over who will sit at Jesus’ right and left hand. Jesus says, “Whoever wants to become great among you must be your servant…just as the Son of Man did not come to be served, but to serve.”

The players tried to place themselves in their neighbors’ shoes and wondered: What would it look like to serve the neighborhood? Jesus reconciled people across differences. It might be awkward, but could they do the same? Coach Espy and Troy proposed the idea of hosting a cook-out for the neighborhood to build relationships and serve the community.

“Let’s do it right now!” the football players said. Fifteen players and Troy went through the neighborhood to engage in conversation, listening and apologizing as needed, and inviting everyone to the cook-out.

In one conversation, the neighbor was initially dismissive and very clearly angry. But after the players created space for her to share her feelings of frustration, they ended up getting to pray with her and her family. They saw the power of Jesus at work as anger was replaced with peace. And they followed Jesus’ example of being a servant to their neighbors through listening and engaging without fighting back.

The cook-out was two weeks later. To prepare, we looked at a third awkward situation in the Bible, this one in Acts 2. After the Holy Spirit came down on the disciples and they began speaking in other languages, some people mocked them and said they were drunk. But Peter engaged boldly and invited the crowd to follow Jesus.

Anticipating that the cook-out would bring opportunities to explain that Jesus was the motivation for their service, the players practiced together in pairs, what they would say to their neighbors. Then we prayed and went out front to cook up some food!

It was amazing to watch players and neighbors gather outside the football players’ house. Once the focus of sensational newspaper headlines, the property was now a hub of conversation and laughter bridging the neighborhood divide.

One player grilled up his family’s secret chicken recipe, while neighbors brought potato salad and homemade bread. The mayor’s wife ran back to her home to get more silverware. After a few hours, the sun began to set as the cook-out ended.  (But not before the police stopped by to share that other neighbors complained about the noise.) By following Jesus’ example, the players engaged the conflict and helped to heal the damaged relationships with their neighbors.

But the story continued. Not too long after the cook-out, the landlord evicted the players because rent was overdue. Many churches, local organizations, and the mayor worked together to support the players.

Over the next few months, a soup kitchen provided meals. Churches and individuals housed the players. The local newspaper raised awareness about the challenge of housing for student athletes in the tight and expensive Northern California rental market. InterVarsity students from area schools attended and cheered on the players at their last home game. A local Christian television show dedicated a whole episode to the football players’ story.

The End of Football at Mendocino

However, after the struggles of fall semester, most of the players did not return for the spring semester.  In February, another article came out in the town newspaper: “College to End Football Program.” After lengthy discussions, Mendocino College administrators had decided to conclude the program in light of housing and financial concerns, and student well-being. The coach found out he was losing his job. The remaining football players found out they were now being forced to find new colleges where they could play ball.

While it seems that our Athletes InterVarsity football ministry at Mendocino College is destined for only one year, our service has not been in vain. My colleague Troy and I walked through the open door God gave us a year ago to witness to and disciple a football team. We didn’t feel all that skilled or confident, but we sought to be faithful in loving these men made in the image of God, hoping they would see God through us.

True to God’s character, he did more than we could ask or imagine. Though eviction could have led to a sense of homelessness, God was at work taking care of his family. As Athletes InterVarsity, we were blessed to be a part of sharing God’s love with this team.

“You truly have been a blessing to me,” Coach Espy told us.“I’m so thankful for you and Troy; I can’t say enough good things about you two and what you have done.”

One of the players, Jimmy, expressed his appreciation too: “I am thankful for you [InterVarsity] believing in the Mendocino football team this entire school year. You gave hope to a bunch of broken individuals who needed God. Thank you for your consistency!”

Another player, Frank, decided at the last minute to attend our recent InterVarsity weekend retreat. During the retreat he came forward to make Jesus the leader of his life. “I have seen and felt Jesus moving inside me,” he told us.

God still uses awkward situations to draw believers to him.

Jenny Klouse is InterVarsity's Area Director in the North Coast Area of California.