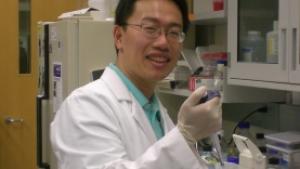 Jimmy Lin is looking for answers. He is enrolled in the Medical Scientist Training Program at Johns Hopkins University School of Medicine, which will award him with both MD and PhD degrees and equip him with the training he needs to go after the answers he seeks in cancer research. He’s also working on a Masters Degree in Health Sciences in the Johns Hopkins Bloomberg School of Public Health, and a Masters Degree at Reformed Theological Seminary in Washington, D.C.

"The purpose of the MD/PhD program is to train scientists who can also think like doctors, and bridge the gap between basic medical science and something that could be more helpful for patients," Jimmy said. The two additional Masters degrees he’s working on come out of his interest in emotional and spiritual health, as well as physical health. The MD/PhD program takes seven years, so he’s able to fit the other two programs into the less intensive periods of his study schedule.

Praising God for everything

If you ask Jimmy to describe himself, he might discuss his passion for using computers to do genomics research on cancer (genetic research at the DNA level). But he is more likely to simply describe himself as a medical and scientific doxologist. As he told Mike Hickerson, in an interview on InterVarsity’s Emerging Scholars blog,  “I consider myself, first and foremost, as a person who praises God in what I do.”

Studying the complexity of the human body, as he has done for the past six years, Jimmy is continuously amazed at God’s creative genius. "Just seeing all there is that can go wrong makes me appreciate how we can walk around with our hearts pumping so many times in a day, and we never even wonder about it," he said. “Every little bit has to work perfectly. And then to see that when things go wrong, how I can be a part of God's redemptive processes in making things right once again."

When he began his undergraduate education at Yale University, Jimmy was looking for a different kind of answer. “I was asking the big questions about life,” he said. He had reached the goal he had long dreamed of, entrance into an ivy league university, but the achievement seemed empty. “I had reached the pinnacle, and I started to ask questions about life and purpose."

Growing up in Taiwan in a Buddhist family, he had attended a missionary school, so he knew something about Christianity. He also considered the arguments of atheism and dabbled in hedonism. He is now thankful that students involved in InterVarsity and other Christian ministries reached out to him as he searched for spiritual truth. They helped him find the answers he was looking for.

"That first year God grabbed me and met me through all of these different people on campus,” he said. "I said a prayer and gave it a try and a lot of small miracles started happening in my life to guide me and encourage my faith."

Jimmy took advantage of training camps at Toah Nipi, InterVarsity’s New England training center; he participated in spring break service and evangelism trips. By the time he was a senior he was on the InterVarsity chapter leadership team.  "InterVarsity was very critical in helping my early formation as a Christian and a leader,” he said.

During the year following graduation, as he applied to Johns Hopkins and other medical schools, he worked in a lab doing research and served as a volunteer InterVarsity staff member at Yale and Wesleyan Universities. As he evaluated various medical schools, he also evaluated local churches and campus Christian fellowships. He was glad to discover a Christian graduate student fellowship at Johns Hopkins. Now he helps lead a fellowship of medical students and works to build relationships between the Christian groups on campus.

As he works with colleagues through his research and attends scientific conferences, Jimmy tries to share his Christian faith in a way that both honors God and his colleagues, not minimizing his own beliefs but being open to listen to other perspectives. He remembers his InterVarsity training, particularly related to Bible study leadership. “The process of inductive Bible study was essential to me,” he said. “I want to be a leader who welcomes different opinions but has a plan for guiding people through the process."

Jimmy’s career will enter a new phase next spring, when he completes the MD/PhD program at Johns Hopkins. He doesn’t know where his career will take him, but he is confident he will have many opportunities to praise God in what he does.

UPDATE 2015 - Jimmy has been actively engaged in medical research and recent gave a talk back in Baltimore, reporting on advancements in cancer research.

To share a story about how God has used InterVarsity in your life, drop us a note.  For more information about InterVarsity’s Alumni Department see www.intervarsity.org/get-involved/alumni. You can make a direct financial donation to support InterVarsity’s work at Johns Hopkins University by following this link.