God Always Has a Plan 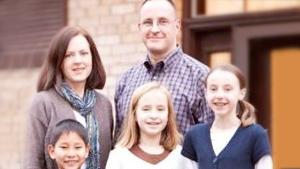 Paula Puckett still finds it hard to believe that four friends on her dorm floor invited her to an InterVarsity prayer meeting. It was at the start of the second semester of her freshman year at William and Mary. “I’m amazed because if I had been in their position I wouldn’t have thought someone like me would’ve wanted to come to a prayer meeting.”

Even though she was more interested in partying than praying she decided to go with her friends. At the prayer meeting she observed women who had a peacefulness and self-confidence that she had never seen before.

“Back in my room alone my simple prayer was, ‘God, whatever those women have, I want,’” she said. “I dove into InterVarsity head first and never missed a meeting after that. I did everything, went on every mission trip, and to every chapter camp.”

After she graduated, with degrees in Spanish and Religion, she thought for a long time that maybe she should’ve devoted more time to her studies and less time to InterVarsity, to get the full advantage of her college education. But now, after being on staff for most of the past 20 years, she’s come to a different conclusion.

“I was becoming a staff worker, learning what it meant to follow Jesus,” she said. “I was getting in touch with what it meant to do campus ministry even as a student. I’m not as hard on myself now.”

Paula joined staff following graduation and worked on several campuses in New England, with her longest tenure seven years at the University of Rhode Island. After she married Blake, a friend from high school who had been her first donor, they explored overseas ministry with InterVarsity Link.

In the fall of 1999 they moved to central Asia. “And that began the great adventure, the greatest adventure of our lives so far,” she said. After a year and a half, just when the ministry seemed to be going well, they were suddenly deported. They moved to another Central Asian country and enjoyed two more years working with students. “The Central Asian ministry was really beginning to gel,” she said. “We saw God doing some amazing things.”

One of the most amazing things was the first ever Central Asia IFES student conference in 2002. “It was the first time believers from Kazakhstan, Kyrgyzstan, Uzbekistan, and Tajikstan had ever seen each other,” she said. “They had never met so many believers from outside their own country.”

The next six years saw several moves back and forth between the U.S. and Central Asia, related mostly to her husband’s career in law and the military and not with student ministry. In fact, Paula left InterVarsity Link staff for most of that period as their family began to grow. She calls it her five-year maternity leave.

“The day I resigned from InterVarsity was one of the hardest days of my life,” Paula said. “I feel like I was born to be on staff; not a day went by that I didn’t miss it. I have never been able to imagine myself doing anything else. God was faithful during those five years off staff even though it was hard.”

To other women on staff who are faced with a similar decision, Paula counsels patience. Changes come, but God always has a plan.

“I had this strong sense that He was going to give it back even sweeter than it had been,” she said. “And that has been my experience. The last three years have been the most satisfying ministry that I’ve ever had.”

Paula rejoined InterVarsity in 2008 to work with the Graduate and Faculty Ministries at Indiana University. While there she saw the chapter grow from 10 to 40 students. Then when her family moved back to northern Virginia she discovered the campus of George Mason University (GMU) was just a few miles from her new home. She also discovered a GMU faculty member had just contacted InterVarsity, requesting ministry on campus. Paula is now working with graduate students and faculty on two different GMU campuses.

Reflecting on her 20-year career in campus ministry, Paula says the most important lessons she’s learned have been about prayer. “In my younger years I did my staff work based on what I thought I should do or based on training. And I prayed too. Now I pray first and my staff work flows out of that. Now I don’t want to set foot on campus until I have a sense that God goes before me.”