God and the Genome | InterVarsity
Skip to main content
News

God and the Genome 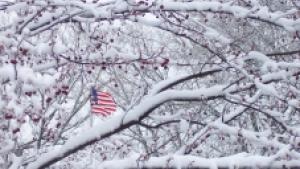 The buzz on the campus of Stanford University in early February was all about DNA, the Human Genome Project, and God, following a lecture by Francis Collins, the director of the project. “As we study the DNA of our organisms, we are looking at the language of God,” Dr. Collins said.

An estimated audience of 2,300 people heard Dr. Collins, filling up the largest auditorium on campus, plus an overflow auditorium and several overflow classrooms. A week of roundtable discussions would follow the lecture, to give attendees an opportunity for further discussion.

The buzz on the campus of Stanford University in early February was all about DNA, the Human Genome Project, and God, following a lecture by Francis Collins, the director of the project. “As we study the DNA of our organisms, we are looking at the language of God,” Dr. Collins said.

An estimated audience of 2,300 people heard Dr. Collins, filling up the largest auditorium on campus, plus an overflow auditorium and several overflow classrooms. A week of roundtable discussions would follow the lecture, to give attendees an opportunity for further discussion. “There has been a lot of good conversation with lab mates and other friends,” said Kyle Heath, a member of the InterVarsity Graduate Christian Fellowship group that planned the event. “I think the most valuable discussions are happening one-on-one in dorm rooms, late at night.”

The lecture started, naturally, with genetics. “Mysteries that have puzzled us for decades are revealing their secrets almost daily because of the tools that have been developed as part of the Human Genome Project,” said Dr. Collins.

But then the lecture shifted to religion as Dr. Collins began to make a case for his main issue, that faith and science are not incompatible.

Dr. Collins was not raised with a religious faith. But as a medical researcher, an uncomfortable question from a medical patient confronted him with a blunt reality. The reality was that he had made a decision about one of life’s most important questions, “Is there a God?” without considering the evidence.

A neighbor offered him the book Mere Christianity by C.S. Lewis and he was surprised by what he read. “I discovered it was quite reasonable, based on reason and observations about nature, to say that God’s existence is a fairly compelling alternative,” he said. His atheism became much less plausible.

As a scientist he couldn’t offer an alternative explanation for how well mathematics describes the universe. It seemed as though the universe was designed by someone with a mathematical mind. He was amazed by the precisely tuned physical constants that make life possible on our planet. “We live on a knife edge of improbability,” he said. “The probabilities of this having been a lucky coincidence are very small.”

Neither could he offer a rational response to the recognition of right and wrong that’s inherent in each human being, sometimes prompting actions counter to self-interest. “Either evolution is mixed up here, or there’s something important going on,” he said.

The implications of what he was reading were obvious. “I had to walk away from atheism, which seemed the least rational of the choices available to me, and towards the possibility of God’s existence,” he said. After wrestling with the decision for months, he finally became a follower of Jesus Christ.”

Dr. Collins continued the lecture by offering a rationale for reconciling faith in God with the theory of evolution. He rejected the very literal reading of Genesis chapters one and two, reflected in Young Earth Creationism, as well as the Intelligent Design movement. Instead he favored what he called BioLogos, “God speaking life into being,” or in other words, Theistic Evolution.

Almighty God, who is not limited in space or time, created a universe 13.7 billion years ago with its parameters precisely tuned to allow the development of complexity over long periods of time. After evolution had prepared a sufficiently advanced ‘house’ (the human brain), God gifted humanity with the knowledge of good and evil (The Moral Law), with free will, and with an immortal soul. We humans used our free will to break the Moral Law, leading to our estrangement from God. For Christians, Jesus is the solution to that estrangement.

With this perspective, Dr. Collins said that he no longer had to choose between faith and science but could embrace both. “I can find God in the cathedral as well as the laboratory,” he said. “I can find God while reading the genome as well as the Bible.” He called it sad that many young people are being told that faith and science are incompatible and offered advice from the early church father, St. Augustine.

In matters that are so obscure and far beyond our vision, we find in Holy Scripture, passages which can be interpreted in very different ways without prejudice to the faith we have received. In such cases we should not rush in headlong and so firmly take our stand on one side that, if further progress in the search for truth justly undermines this position, we too fall with it.

“I think this is one of the most unfortunate tragedies of our time,” Dr. Collins concluded, “that faith and science have been put forward as a conflict without a solution.”

Five hundred copies of the book Mere Christianity were given away to attendees after the talk, which was co-sponsored with several other campus Christian groups. “What this represents is a seed planted,” said Joel Mehler, another graduate student on the planning committee. “Dr. Collins has been a great role model for many of our members who are in the bio sciences. He has lived out what it means for a Christian to engage in a scientific field.”

Pete Sommer, an InterVarsity campus staff member at Stanford noted that the entire event was coordinated by a student committee, led by grad student Amy Chambers. It went very smoothly, which also left a very positive impression with the campus administration. “The Stanford Facilities director called it the best organized student event he had ever seen,” he reported.

Two critics of religious faith, Christopher Hitchens and Richard Dawkins, also visit Stanford this semester. Having Francis Collins talk at Stanford was very timely. “I think one of the biggest outcomes of this was a pronouncement to the campus that science and faith don’t have to be at war,” said Kyle Heath.

You can make a direct financial donation to support InterVarsity’s work with graduate students on the Stanford campus by following this link.