God Brought Us Together “In a Unique Way” 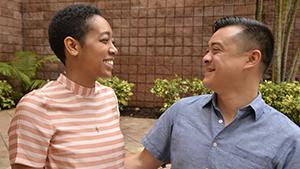 “Everything happens at Rockbridge,” LeLe Hsu said, describing one of the most important connecting points in this story. The scenic conference center in the Shenandoah Valley is well known to InterVarsity staff and students in Virginia and the Carolinas as the site of Chapter Camp retreats, winter conferences, and other events where students and staff spend time away in Bible study and discipleship training.

As InterVarsity students who held almost every position available in their chapters, both LeLe and her husband, Greg, spent many days at Rockbridge, training to be student leaders. But despite these similarities, their backgrounds were very different, including being from different college generations.

Greg arrived at Duke University already familiar with InterVarsity, having heard about the Urbana Student Missions Conference from his parents. But being raised in a Chinese immigrant church, he wasn’t sure he wanted to be in a chapter that was mostly Asian American.

Attending a fall weekend retreat changed all that. Greg’s faith flourished through the speakers and small group sessions, and he met lifelong friends. “My faith came alive with a new joyfulness,” he said. Greg went to Rockbridge that May for small group leader training.

His father was a doctor and his mother a lawyer but neither profession appealed to him. When his campus minister pointed out that he was spending about 30 hours a week on InterVarsity chapter activities and that he might consider joining the ministry full-time staff, Greg laughed. “That got me thinking about it though, because I’d really never considered it.”

During his senior year he participated in a vocational discernment program at Duke. “Through the course of that program, I got the sense that God was saying, ‘I want you to apply for staff,’” Greg recalled. He applied, was accepted, and spent his first seven years on staff at the University of Virginia.

LeLe found InterVarsity as a confused freshman at the University of Mary Washington. She had many questions about faith (and about why she had just been kicked off the basketball team). The InterVarsity community warmly accepted her, though she was one of the few people of color in the chapter.

During her sophomore year LeLe was encouraged to start an athletes Bible study. She opposed the idea at first but eventually realized that athletes, often placing a lot of their identity in their sports, need to know the freedom that comes through faith in Christ.

As a senior, she was president of the chapter. And she resisted the idea of joining InterVarsity staff. She considered graduate school, applied to the Peace Corps, and almost accepted a job teaching math in Africa.  “All I had to do was send in the name of the country where I wanted to work, and the Lord was like, ‘You know you’re just running away,’” LeLe said.

I Wasn’t Expecting This

Greg had already been on staff at the University of Virginia for several years when LeLe joined InterVarsity’s ministry at Old Dominion University, and they were introduced to each other. LeLe remembered Greg from her time as a student, impressed by his preaching during a track at Rockbridge.

InterVarsity’s 2016 Asian American Staff Conference—hosted in California, not Rockbridge—finally brought them together. As Asian American staff coordinator for the region, Greg encouraged LeLe to attend to help her understand more about her biracial heritage as a Black American and second-generation Filipina.

Several months later, while at Chapter Camp at Rockbridge, Greg’s questions during a debrief helped her process her initial tension, fear, and discomfort and what she learned through her interactions with other Filipino staff. (LeLe explained more about this in a story she wrote last year for inheritance magazine.)

Still feeling slightly unsettled the morning after their debrief, LeLe realized one more thing, she was romantically attracted to Greg. “I came to the conclusion that I would tell him because I’m okay with rejection,” she said. Greg, meanwhile, had thought that she had already figured out that he was similarly interested in her.

They knew they had to talk but dreaded it. As an East Asian male, Greg had “a deeply ingrained insecurity about his desirability and eligibility.” LeLe had a long-standing sense that other Asians did not consider her Asian enough.

Though they did talk, they didn’t quite get to a DTR (define the relationship) moment. After they both returned returned home from Rockbridge, LeLe decided to call Greg:

Silence. For a whole minute.

Then Greg said, “Okay, actually I’m interested in you. This is really great!”

“Well, I did not prepare for this outcome,” LeLe said. They chatted aimlessly for a minute, and then the call ended, awkwardly. A few days later, Greg left for a previously planned family vacation in Europe. But finally, at the end of summer, they had their first date.

From 2016 to 2018, Greg and LeLe devoted much time to “working through a lot of things,” including how to be a staff couple. For a short while they enjoyed conferences at Rockbridge even more because they could spend time together, even if they had different responsibilities.

Then Greg became an Area Director in Boston in 2017. “We set aside a lot of time and money to visit each other and met every five to six weeks,” he said. “We were thankful for direct flights to Boston.”

Communicating well has been critical. With the help of InterVarsity staff friends who offered counsel and spiritual direction, they realized that they didn’t want to fall into a pattern of coaching each other.  “We had to learn different practices of how we shared,” Greg said. “It could be either, ‘I want your ministry thoughts about this,’ or ‘I’m just sharing personally about this.’”

They were married in June of 2018. Greg is now Area Director for North Boston, which doesn’t include Boston University, where LeLe serves as a Campus Staff Minister. “The Lord has provided so much community for us in the first year and a half of marriage,” LeLe said. “We feel loved and cared for.”

But even more than that, they appreciate how God used InterVarsity to grow each of them in their ethnic identities, and it’s emphasis on discipleship that offers emotional healing and transformation.

“The beginning of our relationship undermined the lie that we would never be accepted by someone of the other’s ethnicity and culture,” LeLe wrote. “Greg and I noticed that our unimaginable relationship was truly healing and redemptive of God’s deep love for us, specifically around our ethnicities.”

“God used all of those things to bring us together in a unique way,” Greg said.

Re-envisioning the Mission Field as an Area Director

InterVarsity’s 2030 Calling got Amy Jacobsen thinking about the future. Not just about InterVarsity’s but also her own ministry future in southeastern Wisconsin.

Living Intentionally No Matter What

When MBA student Liz Dong was asked to help plan and moderate a Believers in Business conference panel on dealing with disappointments, she had plenty of experience to draw from.