God Is Not Dead on Campus 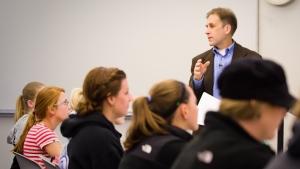 The struggle between faith and doubt on college campuses is highlighted in the movie God Is Not Dead, which has been seen by surprisingly large audiences since its release one month ago today. For three weeks in a row, God Is Not Dead ranked in the top five movies, generating a financial return ten times its $4 million production budget.

But does its theme accurately reflect the climate confronted by InterVarsity in its campus ministry? A valid question, since InterVarsity is listed at the end of the movie among the groups which have gone to court to defend religious freedom on campus.

The Contrast in Campus Ministry

From InterVarsity’s perspective, we have never been more successful in our work on campus. The number of people coming to faith in Jesus Christ through the ministry of InterVarsity during the 2012-2013 school year was up 50-percent from five years previous and double the number of ten years previous. InterVarsity staff, students, and faculty are doing an outstanding job of sharing the gospel message, often with tools such as Proxe Stations, interactive exhibits that encourage conversations about important issues.

At the same time InterVarsity is facing increasing resistance to our efforts to faithfully present the gospel. In a few instances, InterVarsity chapters have been derecognized as student organizations because of our desire to remain true to the unchanging message of the gospel and demand adherence to standards of faith from our student leaders. A section of our website describes the campus challenges we have faced in the past few years at schools such as Vanderbilt, Rollins College, and Bowdoin College.

It’s Not All Bad

Are all campuses antagonistic, and all college professors as antagonistic as the professor portrayed by Kevin Sorbo in God Is Not Dead? Fortunately no. Our staff and students have good relationships with administrators on most of the 590 campuses where we have chapters.

And InterVarsity has a long history of working with Christian professors through our Graduate and Faculty Ministries. Some top faculty, like those we have profiled at Oregon State University, the University of Oklahoma, and Augustana College, are even former InterVarsity staff members. College presidents and university presidents are also InterVarsity alumni.

College Is Meant to Be Challenging

But, as the movie illustrates, the college campus provides challenging opportunities for Christians to grow their faith. A simple faith that satisfies in childhood is either stimulated to grow or discarded. InterVarsity’s campus ministry provides a framework for students to grow in their faith.

Most Christian college students will not have to address an in-your-face challenge such as God is Not Dead depicts. But they will face a more subversive worldview, one also reflected in the mass media and other parts of society, which nonetheless assumes that God is not relevant to our world today.

A strength of InterVarsity’s campus ministry is Bible study. Through evangelistic Bible studies called GIGs (Groups Investigating God), and other forms of inductive Bible study, we share with students the relevance of God’s Word to our world today. We have found that Bible studies, done with students as a part of ministry to needy communities, are much more effective in reaching their hearts than confrontational debates.

Those Who Saw the Movie

One InterVarsity staff member who saw God Is Not Dead with some of his students said the students were encouraged by the movie to be strong in their faith. The movie has been criticized because it is “preaching to the choir,” but the movie’s producers say that was the point, to encourage Christians to stand up for their faith.

Another InterVarsity staff member went to the movie with a graduate student who has been experiencing persecution in her program for two years, and was told by her dean that she did not fit in the program because she is a Christian. She was encouraged by the movie because she identified so closely with the challenge it portrays.

We Love the Campus

For InterVarsity, the campus is our mission field. We love the campus; we love academia. Our vision is “to see students and faculty transformed, campuses renewed, and world changers developed.” We have been pursuing this mission on campus for almost 75 years.

During the next few weeks of April, May, and June, thousands of students who have had life transforming experiences through InterVarsity this past school year will add a week to their school year by attending year-end camps at rustic locations across the country. At Chapter Camp, as the week is often called, they will deepen their faith commitments through Bible study, and help their chapter plan for an even stronger presence on campus next year.

Each campus is unique but each campus needs a witnessing Christian community that is willing to respond to the antagonistic and the curious with the compelling message of love from the gospel of Jesus Christ. We invite you to join us and help us fulfill our vision for the campuses of America.

Greg Jao, InterVarsity's Field Director for the Northeast, offered some additional thoughts on this topic in interviews with Mission Network News and  with CBN News.