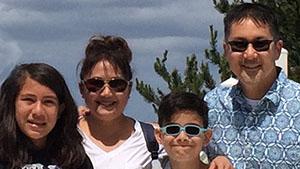 God spoke to Steve Tengan with a baseball analogy. An alumnus of InterVarsity at the University of California Los Angeles (UCLA), Steve was working full-time (40 hours) at an engineering job and volunteering with InterVarsity almost full-time (30 hours). “I really liked being an InterVarsity volunteer, but I knew it wasn’t sustainable to do both," he said.

He also felt strongly about justice ministry, particularly helping inner-city kids, and wondered if that was the kind of ministry he should be doing. Should he  continue volunteering with InterVarsity or was God calling him to another ministry?

As Steve prayed and pondered, he was reminded that campus ministry offered a unique window of opportunity: to be able to help redirect the lives of students who were being called by God to live a life of purpose, to redirect their lives as his had been. He realized that sometimes new circumstances meant changed priorities. God gave him the analogy of giving up the Giants to become a Dodgers fan when moving from the Bay area to Los Angeles. He left his engineering job and joined InterVarsity full-time as a Campus Staff Minister.

Steve met InterVarsity his first day on campus at UCLA when student volunteers helped him unload the family minivan and then invited him to a Bible study. But for his first two years on campus he was apathetic and drifted spiritually. As his sophomore year wrapped up, he vowed to turn his life around, but realized he had failed miserably by the end of that summer.

“If I hadn’t known that I could get forgiveness from God and, with his guidance, make better decisions, I would have considered suicide,” he said. “It was very clear to me in that moment, I didn’t want to mess around anymore.”

Living in community with other Christians, beginning in his junior year, and helping with outreach for a Bible study on his floor, brought focus to Steve’s spiritual life. He was no longer living the double life that made him weary. “I went from ‘having fun’ and neglecting class to doing ministry,” he said.

As he approached graduation, Steve was thankful for how God had redirected his life. He wanted to follow the other five UCLA InterVarsity students who were joining InterVarsity staff, but to honor his parents he took an engineering job instead. However, he stayed involved as a volunteer until, through the baseball analogy, God called him to full-time campus ministry.

God continued to speak to Steve through circumstances about priorities. He met his wife Sherilyn on campus—she worked for another ministry—and they were married in 2003. At the time, he still felt that God might eventually call him to inner city ministry. But Sherilyn was drawn to ministry overseas and prayed God would also call Steve to overseas ministry instead.

One day, as he met with colleagues to talk about the challenge of supporting a ministry plant in a country in the Middle East, God revealed to Steve that missions was a social justice issue. “I’m all about the margins and now I'm on a campus with 40 Christian groups,” he thought. “Why not go to a country with less than that many churches?”

It took several years of discernment and preparation until finally, in 2007, Steve and Sherilyn moved to Paraguay as part of InterVarsity Link. “It was good for my soul but hard to adapt to,” he said later, about their time in Paraguay. The first challenge was learning the language. Then came the challenge of replanting a campus ministry. By the time they left in 2014 there was a healthy and growing student movement.

From Paraguay to Portland

Steve and Sherilyn figured they would return to southern California after leaving Paraguay but were encouraged instead to check with Pauline Fong, who was then Regional Director for the Northwest. As Pauline explained the unique opportunity available in the position of International Student Ministry Area Director in Portland and how living there contrasted with living in L.A., both Steve and Sherilyn were on board.

International Student Ministry (ISM) has a long and rich history in the Portland area but it was time for some restructuring. Two of the top issues Steve is wrestling with are preparing converts for re-entry to their home country, so that their faith remains strong, and building stronger connections between ISM chapters and multiethnic chapters, to help international students develop more Christian friendships.

“I’m excited about God's expanding vision for us,” Steve said, citing successes such as an African student who has blossomed in leadership in a variety of contexts, including with African American students. However, some staff transitions away from ISM have slowed advances.

“We’re not in a big season of harvest right now but we are seeing noticeable differences,” Steve said. “Everybody who has stayed with us for the last five years owns the vision and is excited by it.”

What enlivens Steve most of all is being able to see students transformed by the power of the Gospel. Mark Camp, where students spend the whole week studying the Gospel of Mark, is his favorite week of the year, one of the times when he has the most contact with students. His family staffed the Tacoma Urban Program last summer and he praised God for the spiritual growth he saw in students’ lives. “I haven’t experienced seeing that quick and drastic transformation elsewhere,” he said.

Through it all, Steve’s reminded that God still hits home runs. “I’ve learned that I’m not as important as I think I am,” he said. “I can have all these plans but ultimately it’s not me, it’s God.”

Give to Support International Student Ministry