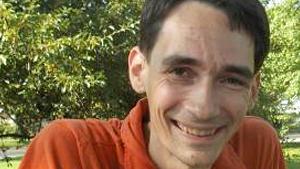 During his first year at Grove City College, Tom Grosh was mentored and taught by some amazing faculty, a number of whom were InterVarsity alumni. They, along with some dedicated Christian peers, challenged Tom to embrace the call of Christ on his life. He did at the end of his first year.

After graduating from college, Tom decided to intern with InterVarsity and 16 years later, he is still on staff. Today, he is the new Associate Director of the Emerging Scholars Network.

Over the years as Tom has served with InterVarsity at a number of schools in Pennsylvania, God has taught Tom many lessons. The most important are about community. The importance of community became especially real when Tom and his wife lost their first child, Elise Faith, when she was born prematurely.

“Our undergrad and grad students at Carnegie Mellon University were some of our closest encouragers through that time of grief and mourning,” Tom shared. “This continued to be true a year later when we rejoiced in the delivery of healthy twin girls.”

The Carnegie Mellon community supported Tom and his wife when Tom faced cancer and their next daughter experienced a life threatening condition soon after her birth. “The care of students, faculty, and colleagues gives me a glimpse of how the people of God were created for life together in Christ,” Tom said.

Today, Tom sees his greatest joy in ministry as providing encouragement and resources for those who have been disappointed and feel isolated in the graduate and professional level of higher education. “Over the past several years, I have slowly moved from attempting to fix those with whom I work, and instead have moved towards more prayer, listening, and encouragement,” Tom said.

“As Christians, we are part of God’s work that began at Creation. In the end, we will be re-created to be as God intended,” Tom continued. “But in the meantime, we are called to work towards that redemptive end. This, of course is true of all areas of our lives: family, friends, vocation, ministry, leisure, etc. I am passionate about sharing that vision with others and inviting others to lives with such a perspective.”

At the university, Tom sees how those in higher education can be redeeming influences by investing in the lives of colleagues, students, and the administration.

“Although we may focus on ministering to a particular campus subset, let’s look at how God longs for every square inch of the university to come under his Lordship, including the people and structure we’re intimidated by, tend to ignore, even consider our enemies,” Tom shared.

Tom looks forward to each day that he has the opportunity to follow Christ one more day and let God’s spirit guide him in all his interactions. As a result of cancer and its resulting physical limitations, Tom has learned that he doesn’t labor in his own strength, but God’s grace alone gives Tom one more day to serve Him.

“Calling is the truth that God calls us to himself so decisively that everything we are, everything we do, & everything we have is invested with a special devotion & dynamism lived out as a response to his summons & service.” — Os Guinness, The Call: Finding and Fulfilling the Central Purpose of Your Life