Hall of Fame Honors for One Staff Member 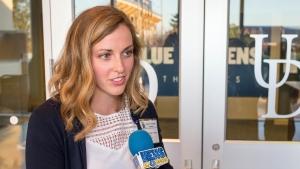 InterVarsity campus minister Colleen Caskey was inducted into the University of Delaware Athletics Hall of Fame at the school’s Homecoming Celebration on Friday, October 28, 2016. She joined nine other inductees, including Super Bowl XLVII MVP quarterback Joe Flacco of the Baltimore Ravens.

Colleen was a leader on her volleyball team as a four-year starter from 2004 to 2007, and a two-year captain. She established several athletic records that still stand, and was named Conference Player of the Year as well as Scholar-Athlete of the Year in 2007, among her many awards.

She was also a spiritual leader on her team, leading Bible studies and prayer meetings and sharing her faith. It was seeing spiritual transformation in her own life and in the lives of her teammates that led Colleen to join InterVarsity staff.

Jeana Beno, InterVarsity’s Area Director for Delaware, said, “When Colleen was on the University of Delaware staff team, she had an expectation that a good team plays hard, treats each other well, and works together to accomplish the goal. Her desire is to do her best and to be a really good player on the team.”

As Colleen worked with athletes at the University of Delaware, continuing the outreach that began under Will Metzger, she nurtured a hope that more campuses would see athletes’ ministry develop. In 2009, at InterVarsity’s triennial Urbana student missions conference, Colleen met with two other InterVarsity staff members who had collegiate athletic experience—Maghan Perez and Ben Sturgill—and together they prayed that God would use them to start a ministry to athletes within InterVarsity.

“Colleen carried that vision and calling back to the University of Delaware and continued to press into ministering to athletes, challenging them to start witnessing to their teammates, and empowering them to lead Bible studies on their teams,” Maghan said. “Not only did she help to grow this chapter to be one of Athletes InterVarsity’s largest chapters in the country, Colleen also started advocating for other staff to begin seeing the athletic community on their campuses as a ministry opportunity. The Mid-Atlantic region currently has 14 campuses with athlete-specific Bible studies or chapters.”

Today Maghan is the national director of AthletesInterVarsity, Ben is the associate director, and Colleen is the regional coordinator in the Mid-Atlantic. Nationally, InterVarsity staff are now working with more than 2,000 athletes, and there are 60 athletes’ chapters or chapters with intentional outreach to athletes. This fall Athletes InterVarsity held its first national staff conference on Chesapeake Bay with 30 staff in attendance.

Colleen's direct work with student athletes on the University of Delaware campus has now been handed off to Drew Harrison. "She believes in following God's Word wherever it will take her in life," he said. "And she believes that God's word changes athletes." She set a good example for him to follow as she helped him develop his own ministry.

“It feels like there’s a lot of momentum around athletes’ ministry in the Mid-Atlantic region,” Colleen said. “It’s been an interesting year.” At the same time the ministry is growing, a mid-season coaching change on the University of Delaware Volleyball team led the athletic director to recruit Colleen to rejoin the Blue Hens as a part-time assistant coach.

With highly motivated, highly competitive, and multi-talented team members like Colleen, it’s no wonder that Athletes InterVarsity is one of the fastest growing areas of InterVarsity’s campus ministry. We expect more InterVarsity athletes will follow the same path of excellence, leadership, character, and faith, on and off the court.