Hallowed Halloween: Trick-or-Treating for the Kingdom 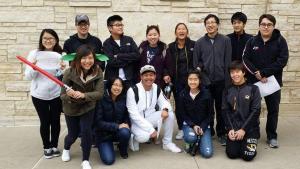 Halloween in Columbia, Missouri, is much like Halloween anywhere else. Pop-up stores appear in non-descript strip malls, filled with the standard array of ghoulish kitsch: witch masks and Jack Skeletons, string cobwebs and tombstones. At dusk, trick-or-treaters swarm neighborhoods like costumed locusts. Candy is given out and eaten, as often by parents as by the children that collect it.

But Halloween is different here in one particularly interesting way. For the past three years, the InterVarsity chapter at the University of Missouri has trick-or-treated, not for candy, but for household items that support survivors of human trafficking.

This tradition began in 2017 when Danny Poon, Campus Staff Minister of the Asian American InterVarsity (AAIV) chapter at Missouri, was working at a local Korean restaurant in addition to his staff work. A customer saw Danny’s jade cross necklace and recognized it as a symbol of Asian Christianity.  The two struck up a conversation. It turned out that Nanette, an energetic Japanese American woman, oversaw the Central Missouri Stop Human Trafficking Coalition.

“It was a slow day, so I got to chat with her. We bonded over the ways that God called her into working with [human trafficking victims] and how I’m in ministry as well,” Danny said. “We met up again a couple weeks later, and I thought, ‘This is something my students need to hear.’”

God had been preparing them to hear it. In Danny’s AAIV chapter, conversations around justice and community outreach had begun to percolate after an earlier outreach event in Chicago. Challenged by the experience, students began to ask missional questions like, “How can what is happening in our chapter expand to serve the whole city of Columbia?” A partnership with Nanette’s organization was a natural fit, and the students were enthusiastic. But what could they, as mere college students, do to help human trafficking survivors?

The students brainstormed together, finally landing on the idea of combining service with trick-or-treating—a student-friendly, nostalgia-filled night of fun that doubled as a way to provide basic needs, like food and household items, to newly freed survivors of trafficking. What began with 10 Missouri students has now, after three years, grown to a group of about 30 trick-or-treaters helping to serve some of the most vulnerable in Columbia.

The logistics of the event are impressive. A week before Halloween, students canvass different neighborhoods with flyers letting residents know that they’ll be seeing some students in costumes trick-or-treating and inviting them to partner by donating items when they come to the door.

That night, students dress up. “There have been some good costumes,” Danny recalled. “The inflatable dinosaur is always a fun one. And last year, a bunch of students dressed up like all sorts of fruit.” They fan out through different neighborhoods. Six or seven cars wait at strategic locations to collect the donated items from students and deliver them. Then everyone heads back to Danny’s house for a massive bonfire.

This event has given incalculable help to those who are newly freed from human trafficking.But Danny has also seen it galvanize his students and chapter. “My student leaders are now seeing creative ways to engage a campus and invite people to see Jesus through service,” he said. “On our campus, I’ve loved the way that students have become fired up to make change in the world. To see them connect [with God’s mission] has been amazing.”

The campus has taken notice. Students at Missouri’s School of Journalism, one of the largest in the country, have interviewed Danny every year about the event. With more and more students interested in conversations about social justice, Danny’s chapter, and their ‘hallowed Halloween’ event, is helping bridge the gap between these discussions and the good news of Jesus. By embodying Christ’s servant heart, they’re helping Missouri students see an important truth.

“Being a Christian isn’t just about planning the best Bible study or being the best preacher,” Danny said. “It’s about finding ways to walk alongside Jesus like this [event], even if people don’t recognize that it’s because of Jesus. The hope is that it will spark conversations later . . . but the end goal is just to draw closer to him.”