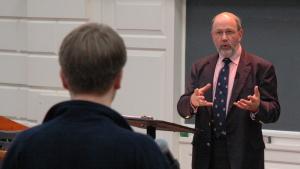 Eight Christian fellowships on the campus of Harvard University are affiliated with InterVarsity Christian Fellowship, three chapters for undergraduate students and five chapters for graduate students. Those chapters sponsored a campus mission with Anglican Bishop N.T. Wright in mid-November in order to invite the broader campus to a dialogue on the issues of faith, hope and changing the world for the better.

Bishop Wright was called by Newsweek magazine, “the world’s leading New Testament scholar,” and his clear communication of Biblical teaching was eagerly absorbed by the attentive students. Bishop Wright spoke in three evening forums, starting with a 45-minute lecture and then answering questions from students lined up at two microphones for another 45 minutes.

Challenging World Changers
“The Holy Spirit, plus our hope for a better world, can make us a people of change,” said Bishop Wright, offering the examples of William Wilberforce and Desmond Tutu, two men who were inspired by God to radically reform their worlds and improve the lives of their fellow citizens. “The only adequate answer to evil in the world is the death of Jesus on the cross,” he added.

College students in general and Harvard students in particular are interested in working to make the world a better place. Bishop Wright, in his talk, offered a formula for change. “Hope plus you, a human being renewed by God, equals change,” he said, inviting his listeners to open their minds and hearts to God’s love and God’s mission.

The presence of one of the world’s leading spokesmen for an intellectual, evangelical faith in God at one of the most prestigious seats of higher learning was an outgrowth of InterVarsity’s commitment to present the Christian faith in an engaging manner in the campus environment.

Conversations That People Want to Have
“It’s all about having the conversations with people that they want to talk about,” said Chris Nichols, InterVarsity’s regional director for New England. “We want to have a real conversation, not just yell at people.”

Chris said that having someone of Bishop Wright’s stature speak on campus not only energized the students but also the staff. Engaging the secular campus is what InterVarsity is all about but on the Harvard campus it is even more clearly about engaging the world, through the campus.

“We’ve defined our mission as whole life conversion to Jesus,” Chris said. “We’re working to help student move from cynic to seeker to follower to leader to world changer.”

The Impulse for Good
Bishop Wright invited his listeners to consider the impulse for good within every human soul. “Even my grandchildren intuit unfairness,” he said. “They know what’s fair or unfair to them, and it’s not because they’ve been to college and studied the concept of human rights.”

He told the students that finding a way to make the world better was what the story of Jesus of Nazareth was all about. “The God who made the world still loves the world and is calling you to help make it right,” he said.

The students involved in InterVarsity’s eight Harvard campus ministry groups will be continuing the conversations with their friends in the weeks ahead, sparked by Bishop Wright’s lectures. “He has given us a language and a stage to take the next step,” said Chris Nichols.