Harvest Time on the Great Plains 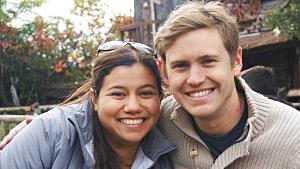 Sitting in a California coffeehouse on a spring day in 2009, Eric Rafferty was in a quandary. After three successful years of campus ministry at the University of Redlands, Eric and his wife, Stacy, had been told by several of their prayer partners that God was sending their ministry in a new direction.

They had looked at other nearby campuses, scouting out possible opportunities to plant new InterVarsity chapters. But they were not sure that was the right direction. In the back of their minds they had always had the idea of moving to Eric’s home state of Nebraska, one of three states without an InterVarsity chapter at that time.

After praying for a few minutes in the coffeehouse, Eric opened up his computer to check his email. The first email he opened was from a couple in his home church in Omaha, saying that they had been praying for 15 years that someone would start an InterVarsity chapter on a campus there. “What do we have to do to make that happen?” they asked.

Eric and Stacy were astounded. “That was our ‘Macedonian call‘ to move to Nebraska,” Eric said. “We thank God that it was clear, because it was a big move.”

The Macedonian call came from Rene and Kathy Padilla. Rene is the nephew of the well-known South American missiologist of the same name, and cousin of Ruth Padilla DeBorst, who spoke at Urbana 09. He is an Associate Dean at Creighton University. His wife, Kathy, is an Instructor of Spanish at Creighton. They met as students through InterVarsity.

At the same time, Rachel Watters, an InterVarsity campus staff member in Iowa, also expressed an interest in planting a chapter at Creighton. And a pastor in Omaha had written to then Regional Director Tom Lin, inviting InterVarsity to the city. The independent initiatives, sovereignly arranged by God, were amazing to Tom, because they arrived just after he had decided he couldn’t handle any further chapter plants at that time. In fact, he had written, “No to Nebraska for now,” in a meeting the previous week.

Rachel’s chapter plant at Creighton got off to a fast start, thanks to the influence of Rene Padilla. For the new chapter at the University of Nebraska-Omaha (UNO), it was not so fast. Eric and Stacy ran into a roadblock: they couldn’t get accepted as a registered student organization. The chapter’s constitution said that chapter leaders must be able to sign InterVarsity’s doctrinal basis. University administrators said that violated the school’s nondiscrimination policy.

Without official registration the InterVarsity chapter couldn’t participate in the student organization fair and other activities that could help recruit interested students. But every time their plans were blocked, Eric and Stacy learned to ask, “Well, what can we do?”

Barred from the student organization fair, they learned they could stand on campus with a banner. Barred from giving away food in the cafeteria, they held a bake sale, a one-cent bake sale. Whenever they met a new student they asked about the student’s friends. “We always looked at people as part of a network, and not just individuals,” Stacy said.

Finally, after furnishing UNO administrators with information from other schools that have nondiscrimination policies and thriving InterVarsity chapters, the UNO chapter won approval. Since then growth has been steady, even when Eric and Stacy were on sabbatical last year. They are especially excited when they talk with a student who has a vision to reach out to another corner of the campus not yet touched by the gospel. “Every campus has corners that no one else is reaching out to,” Eric said.

In the last year Eric has been focusing on planting a new chapter with the athletes at UNO, and a Black Campus Ministry at the University of Nebraska—Lincoln. “I’m not an athlete and I’m not black,” he said. “If no one else is reaching out to that part of campus InterVarsity should be engaging those cultures and it’s probably harvest time if no one else is there.”

It All Began with a Bible Study

Eric and Stacy developed their vision for campus ministry as students at the University of Redlands. Their story is the classic InterVarsity romance. Thrown together as dorm Bible study leaders their sophomore year they didn’t get along at first. Though they both had church backgrounds, they came from widely different families.

But they worked through their differences and became friends. And then discovered they really enjoyed being partners. “We’ve been partnering together in ministry for as long as we’ve known each other,” Eric said. As chapter leaders their senior year, they saw 20 students come to faith and realized that investing in college students was their calling.

Eric and Stacy continued to develop their ministry skills as they joined InterVarsity staff and worked with the Redlands chapter. Former InterVarsity staff member Dan Finfrock was an important mentor to them during that time. Today, after eight years on staff, they are leading other staff as Area Directors for Nebraska. Their vision is to see InterVarsity chapters spreading across the entire state.

“We want to see multiethnic witnessing communities bringing the love of God to every corner of every campus of Nebraska,” Eric said. God is sending their ministry in all sorts of new directions.