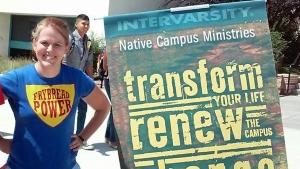 Megan Murdock Krischke nurtured the vision for her dream job for over a decade, and is now seeing her perseverance rewarded as InterVarsity’s first ever National Coordinator of Native Ministries. She became National Coordinator in July 2016, after many years of working with Native students.

Megan is a member of the Wyandotte Tribe of Oklahoma, and began exploring Native Ministries shortly after joining InterVarsity staff in 2000. She attended Native staff gatherings and the LiSteN (Learn and Serve in Navajoland) project. In 2006, she and her new husband moved to Durango, Colorado, to start a Native chapter at Fort Lewis College.

Soon after she became the Area Director for the Four Corners–InterVarsity’s first ethnic specific area–overseeing Native chapters at the University of New Mexico and Northern Arizona University. She took a very small and sparsely attended Four Corners Fall Conference and played a key role in building it into the Would Jesus Eat Frybread? Conference, a national Native student conference that attracts more than 100 InterVarsity and Cru students from all over the country, including Alaska and Hawaii.

In her new role Megan continued to coach staff to reach and bless the Native students on nine campuses in eight different states. She has also worked hard to train and develop Native staff, and to remove cultural and economic obstacles that would prevent them from thriving in InterVarsity.

“Megan has a holy ambition and a drive to fill it,” said Courtland Hopkins, a member of the Lakota Tribe and an InterVarsity Campus Staff Minister in the Four Corners area. “Her ambition is to reach every Native student on every campus. She has encouraged me by saying in words and action that there’s a place in InterVarsity for me.”

Megan has also encouraged long-time InterVarsity staff who have not always identified with their Native heritage, such as Tim Webster, an Oneida tribe member who has been with InterVarsity in northeastern Wisconsin for more than 25 years. “Megan’s enthusiasm and welcome are both relentless and healing,” he said. “Hanging out with and serving Natives and those involved with Native ministry is now my social equivalent of comfort food.”

Paula Fuller, InterVarsity’s Executive Vice President, People and Culture, remembers Megan passionately supporting her vision for Native Ministries in meetings a dozen years ago. She has watched that vision take shape and grow over the intervening years.

“In the last few years, there has been tremendous momentum for Native Ministries,” Paula said. “We have new Native Ministries staff, growth in the number of student-led small groups, and most recently three chapter planters in the national cohort. Megan’s presence and voice at our national leadership table means that we will reflect the beauty and diversity of the Creator a little more fully.“

Ray Aldred, director of the Indigenous Studies Program at Vancouver School of Theology, has also been watching Megan’s vision develop and applauds her tireless efforts on behalf of Native Ministries. “She brings the best of newcomer culture—this is not an oxymoron—to be in a true treaty (conventional) relationship with Indigenous peoples,” he said. “She has shown indomitable fortitude in the face of generations of dominant society–induced trauma on Indigenous identity, showing that the past creates wounds that need healing. Megan has taken on these wounds and has been and is an agent of reconciliation and redemption.”

Megan is passionate about seeing Native students develop into world changer—women and men who bring hope and healing to their communities. “We have graduates working in tribal government, social services, ministry, and law,” Megan said. “As these graduates return to their community they are able to speak about Jesus in ways that resonate with the heart language of their people.”