How InterVarsity Changed My Life 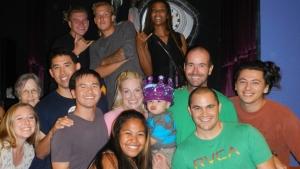 I was a relatively new Christian when I arrived at the Claremont Colleges. During my freshman year, I went to some of the InterVarsity gatherings, but after the first semester I decided I was too busy. Over the next few years I still grew as a Christian, however, reading the Bible on my own and connecting on occasion with my church community back home in Hawaii.

Then, during my senior year, I felt God calling me to connect with other Christians regularly and be a part of a community. I decided to check out InterVarsity again, and it changed my life.

Though I had been involved with several churches, and participated in some meetings with another Christian group on campus, InterVarsity was the first community to emphasize God’s radical grace and unconditional love for all people, especially those who are outcasts and marginalized in society. When I learned about God’s love for the poor and oppressed, and his desire for justice to set the oppressed free and for us to do something about it, I took it to heart.

After graduating from Harvey Mudd College, I tried to live out my faith by getting involved in ministries that reach out to the homeless or at-risk youth in the Santa Ana community. But it wasn’t until I moved back to Hawaii that God led me to the next step.

I was working at the University of Hawaii as an electrical engineer, and had talked to some of the InterVarsity folks there about finding a church with justice-related ministries. God used them to lead me to one that had a homeless outreach and a ministry for reaching sex-trafficking victims.

Here, I found a group of people who were living in a Christian community home and had taken in a few homeless people from time to time. One of the leaders there invited me to move in. I had been considering buying a large house for ministry however, so I asked if he’d be willing to purchase one with me instead.

Five years ago, we closed on a house, invited several others from church to live with us, and opened our home to people in need. Since then, we’ve lived with over 50 different people, over half of whom needed help getting back on their feet; people who would otherwise be homeless, recovering drug addicts and alcoholics, single parents and their kids, survivors of domestic violence, and survivors of human trafficking.

One woman had never gone more than two weeks sober in her life since she started using drugs over 10 years ago. After living with us she has been sober for the past year-and-a-half, and is now holding a steady job as a supervisor at a local supermarket. I personally invested a lot of time and energy with her, so I’m happy to see her doing so well.

Another woman, a single mom and survivor of domestic violence who struggled with alcohol addiction and materialism, is now living in a Catholic retreat center, pursuing a stable life with her two boys. Her boys are getting a good private school education (Hawaii public schools are not great) and have grown to be respectful young gentleman.

A man who struggled with alcoholism for many years was able to overcome his addiction while living with us. He attributes a large part of his recovery to prayer and to being in a loving and grace-filled community. He now lives in Los Angeles and is pursuing his dream of a career in music.

Another man who was introduced to drugs at a very young age and was a drug dealer for a while, has now been sober for over 120 days and completed his rehab treatment program. He recently flew to Seattle to be with his dad.

One man who came in and out of our house had a long history with alcoholism and drug addiction that he was never able to fully overcome. We loved him and he loved the Lord, but he eventually ended up dying from an overdose. We held a memorial service for him and invited his family from the mainland and his friends from the streets to honor and remember him.

We can’t help everyone nor can we take the credit for people’s recoveries, but our home definitely serves as a stepping stone and a sanctuary for people on their journey.

In addition to opening up my home, I’ve been involved with our church’s justice ministry for sex trafficking victims. I go out with a team about once a week to talk to the prostitutes in our city. We don’t preach to them but rather we simply share God's love with them by handing out food, since they don’t get to eat regular meals. We also listen to their stories, pray for them, and help them work with local law enforcement if they are ready to get out.

I’m one of the few men involved in this outreach, but many of the women have told me how much it means to have a guy on the team. All they have known are men who have abused them and taken advantage of them. To meet a man who is caring and compassionate toward them without expecting anything in return makes a big difference in their lives and gives them hope.

Ultimately, all of these stories are of people whose lives have been transformed by God through InterVarsity, indirectly. Without InterVarsity, I would have never learned of and received God’s heart for the poor and oppressed. I wouldn’t have opened up my home to those in need, and I wouldn’t be giving hope to women who have only experienced the selfish and abusive side of men. I thank God that I had an InterVarsity chapter on campus and that he led me to be part of it my senior year. I live a crazy and interesting life, and I have InterVarsity to blame, in a good way.