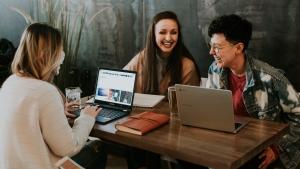 Tomsk is known as the Athens of Siberia. Home to six Russian state universities, one-fifth of its half million population are students. Tens of thousands of those students are from outside of Russia, many from sub-Saharan Africa.

“It’s a growing worldwide phenomenon,” said Richard*, one of InterVarsity's senior ministry specialists. “That’s why they’ve invited me to come and help them.”

For the last three-and-a-half years Richard has been traveling back and forth to sites like Tomsk in Europe and Eurasia to train staff of the International Fellowship of Evangelical Students (IFES) in international student ministry (ISM). He is one of InterVarsity’s longest tenured ISM specialists, and has been involved with ISM for more than 30 years in the western U.S.

“The number of international students keeps growing like crazy,” said Daniel Bourdanné, IFES General Secretary. “What an amazing ministry opportunity.” International students in the U.S. doubled in the last decade, now numbering one million. Globally, there is similar growth, from 2.8 million in 2005 to 4.8 million in 2016 (Migration Data Portal).

“There’s a groundswell of interest in working with internationals,” said Kurt Thiel, who directs InterVarsity’s Link program. Link sends InterVarsity volunteers, like Richard, to assist IFES partners in other countries. More and more requests are coming in for specialists in ISM.

Joseph*, a Link staff worker with ISM experience in the U.S., arrived in Israel about four years ago. Rasha Saba, General Secretary of the Fellowship of Christian Students in Israel (FCSI), invited him to focus on ISM. They discovered groups of Christian international students were already meeting. Having someone to connect them, train leaders, and encourage them was greatly beneficial. Currently there are four ISM groups in Israel and more are forming.

FCSI has separate groups of Arab Christians and Messianic Jews that meet together on occasion for Bible study and discipleship conferences. Rasha said having a third group of people who are “outside of the complexity” of Arab/Jewish relations helps the other two groups feel more comfortable with each other when they are together. “It’s sort of a bridge, I guess,” she said.

All three groups have been knit closer together by the FCSI emphasis on inductive Bible study but it seems to have a special benefit for the international students. “It’s unique that students are able to come to study the Bible in Israel together with locals,” she reported. “Students are saying this is something they will take back home.”

Lindsay Brown, longtime IFES staff member and former General Secretary, observes that many of the current leaders of the Christian church in certain Asian countries came to faith while they were international students in the U.S. “In the book of Acts few people were converted in their home,” he said. “Nearly everybody in Acts was converted away from home.”

The growing global middle class is helping boost the number of international students. Schools like international students because they increase diversity and prestige, and they are a financial boon. Some schools in certain Eurasian countries offer specialized instruction in fields like medicine and engineering, in English, to attract students who can’t quite afford or weren’t quite eligible to enroll in elite universities. Thus, proficiency in English can be a door-opener to ISM ministry in many countries abroad.

Some who are joining ISM ministry are international students themselves. On his next trip to Siberia, Richard plans to meet with a student from Ghana, an alumnus of the IFES affiliate in that country, so that he can train him to do ISM with his fellow students.

As ISM continues to grow and expand within IFES, leaders are studying the theological dimensions of ISM. Daniel Bourdanné says ISM goes beyond hospitality, welcoming the stranger, serving their needs, and sharing the gospel. IFES will also benefit from international students. “They are not coming like empty vessels; we can learn from them,” he said.

Indeed, ministry partnerships are growing through ISM. Kurt Thiel has been in touch with a student in Sri Lanka who plans to study law in the United States. His grades are good enough to get into any elite U.S. law school. His question for Kurt: “Where does InterVarsity need the most help?”

International students are not only coming to the U.S. to study, they are also coming to do ministry. “What a great gift to InterVarsity in the U.S. to have these students with a strong faith and a love for IFES come to us and work with us,” he said.

As the globe shrinks, the body of Christ grows, as each part learns to work more effectively with the others.

*not his real name

Photo by Brooke Cagle on Unsplash