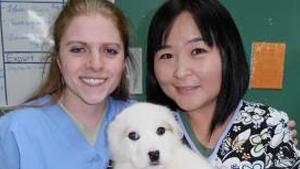 Why would someone travel to a far away destination like Mongolia? Perhaps it's the lure of the vast Gobi desert or the thrill of walking down dirt roads with a yak or reindeer.  But for InterVarsity alumna Julia Evanston*, Mongolia is the place to which God called her as a short-term veterinary assistant and missionary.

The path to Mongolia began in high school for Julia when she first considered missionary work outside of the U.S. But, most of the missionaries Julia encountered were church planters or human aid organizers.

Julia says, "Unlike all the missionaries I met, I felt called by God to pursue animal health, not human health. And I began to wonder if that calling was wrong, because I had never heard of anyone being a veterinarian missionary."

Unsure if she should use her intellect to pursue a career in animal health rather than human health, Julia made plans to attend Colorado State University in Ft. Collins, get a degree in microbiology, and pursue a professional career as a veterinarian in the U.S. rather than abroad. But in 2006, the unexpected happened.

In December, Julia decided to attend Urbana 2006. Midway through the conference, Julia wandered through the exhibit hall where she noticed the Christian Veterinary Mission’s booth. As she talked with representatives, Julia had a new realization. "I discovered that others already had the same calling that I did and I realized that my passion and calling were not wrong. Instead my calling was more confirmed and I had more hope that my dream could actually become reality. "

As Julia returned to college and continued to seek God's plan for her life, she found her calling was further clarified through Bible verses, such as Proverbs 12:10, which says, "a righteous man cares for the needs of his animals, but the kindest acts of the wicked are cruel."  Through studying God’s Word, Julia learned that creation care can be a part of God's plan to reach the hearts of those who don’t know him because in caring for God's creatures, there is often not only an earthly human impact but an eternal spiritual impact.

"Throughout this whole process of discerning God’s plan for my life, I've learned I don't need to justify God's calling to others,” says Julia. “Many may not understand what I do or why I do it, but when God calls, I need to follow. I know that while it's easy for me to focus on the animals, God's call is actually for me to care for the owners as well. And that's a high calling. I've learned that God wants us to use the gifts that he has given. So whatever it is that you do, do it for God's glory."

For the next eight months, Julia will be serving in Mongolia with the Christian Veterinary Mission, an organization helping veterinarians serve others and live out their Christian faith through their profession.  Julia will to return to the U.S. to earn her degree as a doctor of veterinary medicine and continue to serve God through her profession wherever God may lead.

*Julia’s name has been changed due to the sensitivity of her work in Mongolia.