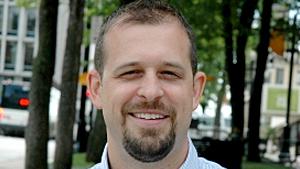 The music, sung by 17,000 people, was unexpectedly powerful for Jim Hicks when he attended InterVarsity’s Urbana Student Missions Conference in 1996. “Never before and never since have I experienced that kind of worship,” he said.

The insights from the Bible exposition and the volume of information gleaned from missionary speakers were also overwhelming for this student from the College of Wooster InterVarsity chapter. He was glad for the chance to talk over his experiences with others in his Urbana small group. "I was absorbing a lot, but I'm an external processer,” he said. “I come to understand things and understand the application in my own life through talking about it and listening to others."

Like many who have attended Urbana over the past 66 years, Jim felt God calling him to cross-cultural missions. He left Urbana with two action steps in mind: going on a short-term summer missions trip to Mexico, and then studying abroad in Colombia for a year.

As a Spanish major, Jim found lots of activities to be involved in during his time in Bogotá. Through a connection with Jorge Atiencia, the Bible expositor at Urbana 96 and a leader in the International Fellowship of Evangelical Students (IFES) in Latin America, Jim joined other Christian students in worship and Bible study. "I probably wouldn't have known there was such a thing as IFES without going to Urbana," he said.

He was also able to intern with a Colombian Mennonite group that worked with internally displaced people, where he found the kind of ministry that he was looking for. "That experience pointed me in the direction of social outreach, holistic ministry that looks to physical and spiritual needs," he said.

But instead of being led overseas right after graduation, as Jim and his wife Rachel expected, God guided them to Phoenix, where Teach For America placed him in a bilingual inner-city classroom.  "It was a very humbling experience,” Jim said. “I feel like God broke some pride and some self-reliance, and caused me to realize that unless it’s his power, nothing’s happening."

Following that he worked with refugees, and then worked for the city of Phoenix on a low-income housing rehabilitation program. Finally, in 2003, Jim and Rachel felt that it was time to move overseas. They began to study the missions organizations listed on the Urbana 03 website.

Just Down the Street

"We started looking for agencies that we felt would have a holistic approach to ministry,” Jim said. “We saw Food for the Hungry there and read about their approach. Then we scrolled down and found out their headquarters was in Phoenix, about 12 blocks from City Hall where I worked."

He now lives in an Asian country, where Food for the Hungry partners with two local organizations that are focused on helping churches develop ministry outside their four walls. As part of his job he trains pastors and lay leaders to embrace a larger role for their church in transforming society. He also works in relief and development, helping churches more effectively respond to disasters such as a recent earthquake.

“The government does a great job meeting physical needs after a disaster, but there are also other needs,” Jim said. “We can work in coordination with the government in a loving way that honors God. We feel like there's a space there for us to do that.”

Today Jim is so thankful for the ways that InterVarsity and Urbana shaped his college experience at the College of Wooster and for the ways they have influenced his life. "InterVarsity was an anchor and provided me with opportunities to exercise and grow in my giftings,” he reflected. “InterVarsity provided a much-needed source of support and encouragement for me as a Christian on a secular college campus. That was my Christian community during college."

Today Jim Hicks embodies InterVarsity’s vision statement as a world changer, who listened to God and followed his leading. As he partners with Food for the Hungry and churches in Asia to meet needs, his daily acts of worship bring praise to God in new ways.

Keywords:
Food for the Hungry
College of Wooster
InterVarsity alumni