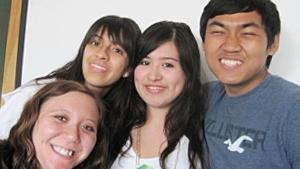 “I grew up going to church all my life—I was involved in Sunday school, church choirs, youth group, and church camp during the summer,” said Megan Wong. “I knew all the Bible stories, but as I look back on it now, my faith was very stagnant.”

Megan’s parents raised her to believe in God. But Megan realized in college that she was just going through the religious motions without understanding how much her life was affected by God and how God could use her.

During her first year at Sonoma State, Megan found InterVarsity. She remembers that her InterVarsity chapter had talked a lot about being a witness on campus and that sharing God’s Word with non-Christians was an essential part of following Jesus Christ. Megan and other InterVarsity students were trained to invite non-Christian friends to join a small group Bible study, where their friends could investigate God for themselves.

From Stagnant Faith to Engaged Discipleship

“One night I was working on an assignment with a classmate and the topic of religion came up,” said Megan. “I felt God nudging me to speak up, but I was really afraid to share my faith—I thought my classmate would think that I was weird or that he wouldn’t listen to me.”

Megan gathered the courage to ask her classmate if he would be interested in joining a small group Bible study where he could investigate God.

“God totally surprised me,” said Megan. “He said yes, and my roommate was listening from her bedroom and asked me the next day if she could join our group too.”

As Megan invited non-Christian friends to study the Bible, she desired to see everyone transformed by God’s Word. The next year, Megan accepted an invitation to become an InterVarsity Bible study leader. She led freshmen Bible study in the dorms. The year after that she mentored the leaders of the multiracial Bible studies and also the LaFe (Latino Fellowship) Bible study.

As Megan continued to grow in her faith and her love for Scripture, she wanted to understand more about God’s purposes in the world. So she attended InterVarsity’s Urbana Student Missions Conference 2003, where she not only heard the Word of God preached from global church leaders, but she began to understand God’s heart for the entire world.  At Urbana, Megan made a commitment to go on a missions trip with her InterVarsity chapter to Guatemala. That summer trip changed her life: She had to learn how to share God’s Word with young kids despite language barriers.

“Even though I didn’t know any Spanish and had a hard time communicating with the kids, they were so excited to see me every day,” said Megan. “I began to learn what it looked like to share God’s love with kids without using language.”

From a young age, Megan has always known that she wanted to become a teacher. As a result of her cross-cultural and faith-growing experiences with InterVarsity, she began to think and pray about where God might use her gifts of teaching after graduation.

“Through InterVarsity and everything that I learned from studying God’s Word, God showed me that it’s important to step outside our comfort zone and take risks,” said Megan. “After graduating, I decided to take a teaching job that I knew would be a challenge—the school that I now teach at is about 75% Hispanic, and most students come from low income families.”

God provided Megan with many opportunities through InterVarsity to grow in her faith, to engage with his Word, and be transformed. As she seized these faith-growing opportunities, not only did God transform Megan, but he used her to transform others.

“InterVarsity taught me that God wants to transform you and use you now in college and later in life in your career,” said Megan. “If we’re open to being taught by him and his Word—and we’re willing to follow him and obey his Word—he will use you wherever you are.”

While Megan learned the importance of being a witness during college, God showed that he is faithful and will continue to be faithful in the future—and ultimately, he will be the one to complete the good work that he has started in each of us.