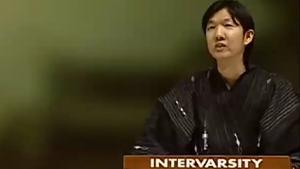 Michael Oh, who told his story of faith and commitment at InterVarsity’s 2009 Urbana Student Missions Conference, has been selected to become the next Executive Director/CEO of the Lausanne Movement, a global coalition of evangelical Christians. Michael is a Korean-American missionary who founded Christ Bible Institute in Nagoya, Japan. On March 1, 2013, he succeeds Douglas Birdsall, who becomes president of the American Bible Society.

Michael became a leader in his InterVarsity chapter as a student at the University of Pennsylvania and was also connected to InterVarsity while a graduate student at Harvard University. “I consider my involvement with InterVarsity as formative to my own spiritual life and calling,” he said.

As an InterVarsity student leader Michael attended the Urbana 90 Student Missions Conference. “I was personally challenged to consider the nations during the amazing talks by Ajith Fernando and Isaac Canales,” he recalled. “I never could have imagined that I would be standing on the stage sharing my own story at Urbana 09.” Michael responded to God’s call to become a missionary to Japan, in spite of the suffering his family had endured in Korea at the hands of Japanese conquerors during World War II.

Becoming CEO of the Lausanne Movement gives Michael the chance to further advance the calling he received at Urbana 90. Lausanne is a global movement that mobilizes evangelical leaders to collaborate for world evangelization. Michael has been involved with Lausanne as part of its Younger Leaders Network, and as a part of the Lausanne Administrative Committee. He is also an ordained minister in the Presbyterian Church in America.

“I'm eager to see a new generation of young Christians around the world engaged with the vision to see the whole church bring the whole gospel to the whole world,” he said. “I ask for your prayers and your partnership until the blessed task is finished.”

“I’m very excited about Michael’s passion for both global missions and catalyzing the next generation, the same things that are at the very heart of Urbana and InterVarsity missions,” said InterVarsity’s Vice President and Urbana Director Tom Lin, who also serves as Lausanne’s International Deputy Director for North America.  “I look forward to closely working with Michael. He embodies InterVarsity’s vision for seeing students and faculty transformed, campuses renewed, and world changers developed.”