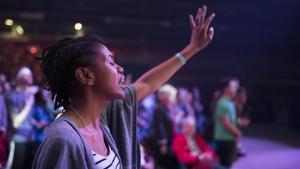 (St. Louis, MO) --- InterVarsity Christian Fellowship/USA has a 75-year dedication to the gospel, orthodox doctrine, and missions while also sharing the message in a way that resonates with the current student generation. Scripture and the gospel are non-negotiables for us. Some of our chapters have been denied access to campuses because of our dedication to core, orthodox Christian doctrines.

We chose to address #BlackLivesMatter at Urbana 15, InterVarsity’s Student Missions Conference, because it is a language and experience of many college students. Many Black InterVarsity staff and students report that they are physically and emotionally at risk in their communities and on campus. About one-half of those at Urbana 15 are people of color, including more than 1,200 Black participants. InterVarsity chose to participate in this conversation because we believe that Christians have something distinctive to contribute in order to advance the gospel.

InterVarsity does not endorse everything attributed to #BlackLivesMatter. For instance, we reject any call to attack or dehumanize police. But – using the language of Francis Schaeffer and Chuck Colson – we are co-belligerents with a movement with which we sometimes disagree because we believe it is important to affirm that God created our Black brothers and sisters. They bear his image. They deserve safety, dignity and respect. InterVarsity believes all lives are sacred – born and unborn. Interim president Jim Lundgren says, “Scripture is clear about the sanctity of life. That is why I’m both pro-life and committed to the dignity of my Black brothers and sisters.”

We see racial reconciliation as an expression of the gospel (e.g., Ephesians 2:14-18), and as an important practice in preparation for global missions. The need for reconciliation is obvious in the Middle East and other global mission fields. It is just as obvious in the United States. InterVarsity has been involved in this conversation for decades. We believe it is important to stand alongside our Black brothers and sisters.