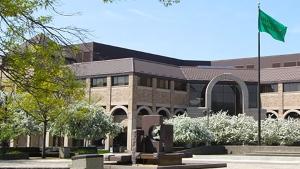 “InterVarsity seeks to serve Wayne State University, its students and faculty, and the local community,” said Greg Jao, Director of External Relations at InterVarsity Christian Fellowship/USA. “We invite the university to embrace a common-sense understanding of its nondiscrimination policy. The policy should protect, rather than penalize, religious groups that seek to retain their religious identity on campus.”

InterVarsity Christian Fellowship is a national organization of Christian college students with over 1,100 chapters in schools throughout the country. At Wayne State, InterVarsity provides a place for Christian students to gather together and practice their faith through Bible studies, worship opportunities and service projects. InterVarsity welcomes all students as members, and anyone is welcome to participate in its activities.

With Becket’s help, InterVarsity took Wayne State to court to defend its right to select leaders who share the group’s beliefs and mission, just like other student groups on campus. After the lawsuit was filed, Wayne State temporarily relented, but still argued that InterVarsity was discriminating in violation of the law and could be kicked off at any time.

“If the Campus Democrats can pick progressive leaders, and Sigma Pi can require their members to be only men, Wayne State should have known they were asking for a fight by denying InterVarsity the same treatment,” said Lori Windham, senior counsel at Becket. “There is no excuse for the blatant religious targeting that these students have faced.”

The court is expected to issue a decision in this case in the fall.

News Coverage of the Hearing: