InterVarsity Is Back in Arkansas 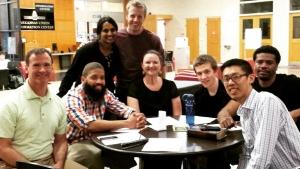 Seventeen months after a busload of InterVarsity staff from Texas and Oklahoma made an exploratory visit to the University of Arkansas, InterVarsity has become an officially recognized student organization once again on the Fayetteville campus. InterVarsity has not had an undergrad chapter in Arkansas for almost a decade.

Joseph Pau-Wu, an alumnus of the University of Texas, has served as a volunteer Campus Staff Member over the past year, shepherding the new chapter. This summer he will be joined by Jacob and Christina Foor, who have been on staff at Trinity University in San Antonio for the past six years.

InterVarsity alumni and parents living in the Fayetteville area and nearby have played a major role in helping the new chapter get on its feet.

Doug Scott and his wife Laura met at an InterVarsity camp, and Doug is a former InterVarsity Campus Staff Member. They have funded a matching grant to help plant the chapter. Doug was introduced to InterVarsity as a freshman in college by David Cox. David and his wife Kate hosted a dessert in their home this spring to help raise support for the new chapter.

Lamar and Shari Steiger hosted the 2013 bus trip to Fayetteville and continue to advocate for the new chapter. Their daughter Olivia was involved in the Trinity University chapter (with the Foors) and is now active in the InterVarsity grad fellowship at the University of Hawaiʻi.

Bronson Stilwell was looking for Christian fellowship when he was a student at Rice University, and helped plant the InterVarsity chapter on the Rice campus. Now in Fayetteville, Bronson and his wife Evelyn, who live across the street from the University of Arkansas’s “Old Main,” offer housing to international scholars. They have reserved an apartment above their garage for Jacob and Christina, the incoming staff.

Associate Regional Director Andrea Thomas is thrilled to see how God has called students, pastors, parents, alumni, community leaders, faculty, University staff, and InterVarsity staff to all play a part in raising up the next generation of world changers in Arkansas. “The Lord has truly gone before us into Arkansas,” she said. “It’s been such a joy to connect the with high caliber people God has called to reestablish InterVarsity as a vibrant multiethnic witness at the University of Arkansas and beyond. There is a missionary movement happening in Northwest Arkansas and InterVarsity is again in the midst of it!”