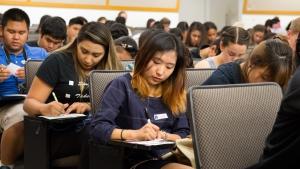 InterVarsity grieves with the University of California–Los Angeles community following the June 1, 2016, murder-suicide on campus that took the life of professor William Klug. The day following the shooting, it wasn’t easy to return to campus. A group of InterVarsity staff and students spent part of the day at Bruin Plaza, offering to pray with students.

Prayers are being said for the families of both professor Klug and Mainak Sarker, his former PhD student who is identified as the shooter. Professor Klug is survived by his wife Mary and two children. At the UCLA chapter’s last large group meeting of the year, chapter members wrote notes of encouragement to Dr. Klug’s family as well as their own professors.

Professor Klug was a graduate of Westmont College, where a professor described him as "a gentle kind person, without a trace of arrogance." He received a master's degree at UCLA and a doctorate at Cal Tech.

In 2012 the Veritas Forum, an InterVarsity partner organization, hosted a talk at UCLA on suffering. The talk was titled “Does God Care?”  Professor Klug served as moderator.